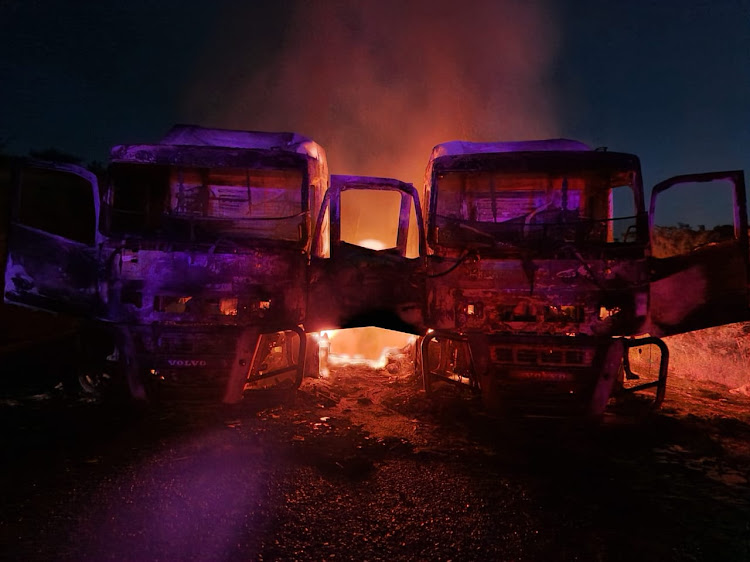 Seven people were arrested in Ladysmith on Friday. This after trucks and cars were set alight during protests.
Image: Supplied

Seven people have been arrested in Ladysmith, northern KwaZulu-Natal, after nearly two weeks of protests and the torching of trucks.

The town has been in chaos after six department of social development cars and five trucks were set on fire during protests calling for the removal of Alfred Duma local municipality mayor Vincent Madlala.

In the early hours of Friday, police were patrolling and clearing rubble on the R103, which has been a hotspot for protests, when they were alerted to activity on the N11 freeway.

“Upon arrival, they spotted a suspicious minibus standing next to the barricades. All the suspects were caught red-handed setting up barricades on the road. A search was conducted and six old tyres, petrol and an axe were found inside the  vehicle,” said police spokesperson Col Thembeka Mbele.

Mbele said that the men, aged between 24 and 47, were charged with public violence. They were expected to appear in the Ladysmith magistrate's court on Friday.

On Tuesday, a government delegation met business leaders, mayors and aggrieved residents in a bid to find a solution to stop the protests, which have brought the town to a standstill and cost it R30m a day.

KZN premier Sihle Zikalala condemned “the violent actions that have led to the destruction of property, torching of trucks and water shortages in some parts of the town”.

Umgeni Water declared on Wednesday that the water supply to protest-torn Ladysmith is safe to consume after social media claims that it had been ...
News
2 years ago

Six vehicles belonging to the KwaZulu-Natal social development department were torched in strife-torn Ladysmith on Wednesday.
News
2 years ago
Next Article