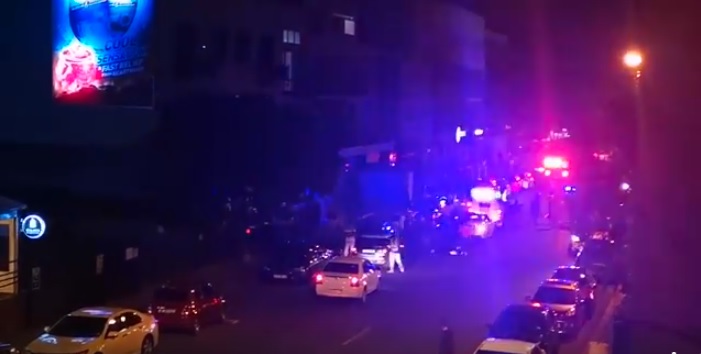 Several videos of the brawl trended on social media at the weekend.
Image: Screengrab from Video

Nine people were arrested after a violent street brawl in Greenside, Johannesburg, at the weekend, police said on Monday.

Several videos of the brawl trended on social media at the weekend.

“It all started with two young girls who had some kind of issue with each other on social media and then they bumped into each other,” Creamy Café owner Koba Iakobidze said.

Iakobidze said the girls, accompanied by their friends, bumped into each other at another venue on Friday evening. “I think one of the groups was kicked out there  and then they were on their way this side. The other group followed them.”

“I didn’t let them in on my side. They were just arguing on the streets when one of the girls called her mother and her aunts. When they arrived, the girls were just disrespectful to them.

“The other girl also called her mother and aunts, and then they called their husbands and brothers. It was just chaos.”

By then both families were involved in the scuffle.

“Two guys were beating each other up and I was trying to stop the fight. No one was listening to me.

“One of the mothers even had a small baseball bat which she was swinging,” he said.

Iakobidze said police stood by and watched the fight.

“What’s the point of having police if they are not doing anything?”

She said cases of common assault were opened and nine arrests made.

The Greenside Residents' Association said several complaints had been raised over the years in the area.

“As a result of this, residents of Greenside are being driven away from the business area and this causes damage to legitimate business and harms daytime trade.”

The association said it was working with the city of Johannesburg to address issues raised by residents.

“We are determined to keep working on these issues so our beautiful suburb can flourish and we can enjoy the wonderful benefits that it offers.”