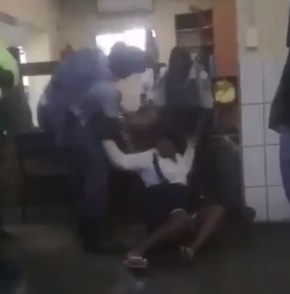 The incident at a police client service centre in Sedibeng was caught on video.
Image: Screengrab from video

The police officers who allegedly assaulted and manhandled a woman at a client service centre in Sedibeng, south of Johannesburg, have been identified.

A video of the incident was widely shared on social media at the weekend.

The footage depicts two SAPS members in uniform dragging the woman across the floor.  One of the officers slaps the woman twice, while a second tries to put what appears to be a wig back on her head.

The context of what led to the altercation is unclear.

Police did not specify but unconfirmed reports suggest that it happened at Evaton police station.

‪Here we go yet again! Look at these @SAPoliceService members. This apparently took place at the Evaton police station. ‬

Provincial police commissioner Lt-Gen Elias Mawela has ordered an urgent investigation into the circumstances of the incident.

“To this end, the members captured on the video have been identified and the departmental investigation is under way," she said. “Whatever measures that will be taken will be guided by the outcome of the investigation.”