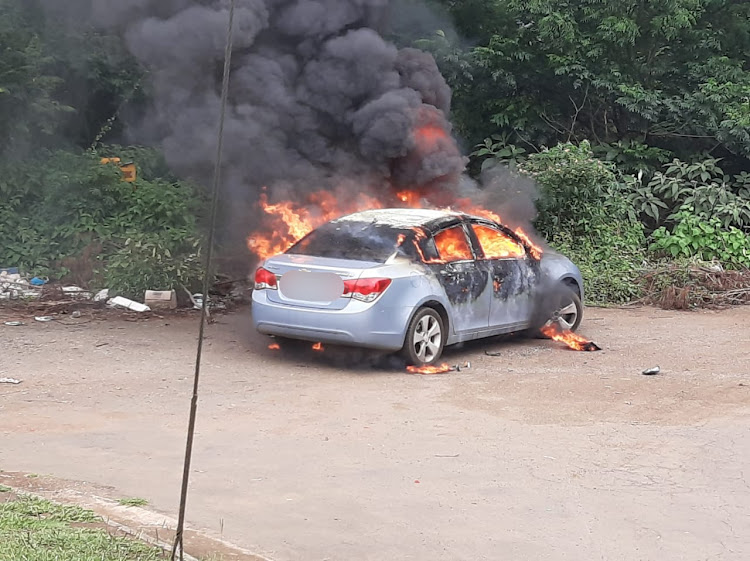 KZN police have confirmed that the car that was set on fire in Pietermaritzburg on Friday was stolen
Image: Supplied

A woman was hijacked, cars were burnt, firearms illegally discharged and tyres spun in Pietermaritzburg on Friday allegedly as a tribute to a dead robber.

The man, whose identity is not known, was to be buried on Saturday.

Police had their hands full containing the “lawlessness” that prevailed over two days.

KwaZulu-Natal provincial police commissioner Lt-Gen Khombinkosi Jula warned: “Firm action will be taken to those who are found to be in possession of unlicensed firearms at the funeral and also those that use their legal firearms to fire gun salutes.”

Police spokesperson Capt Nqobile Gwala said there was a heavy police presence at Grange, Pietermaritzburg, to contain the situation, prevent criminal activities and arrest all those who commit criminal acts.

“This also includes searching suspicious people, vehicles and all those who will be found breaking the law will be dealt with harshly.

“Police will also be checking for stolen cars that are used for the spinning of tyres at the funeral.”

An ambulance assistant was left temporarily blinded after he was sprayed with a liquid during an ambulance robbery in Ntuzuma E section, north of ...
News
1 year ago

Jula said three men aged between 40 and 45 were arrested on Friday for illegal possession of a firearm, discharging of a firearm as well as spinning a vehicle on the road surface.

“Another two suspects were arrested for an attempted carjacking at Pelham today. One of the suspects was found in possession of an unlicensed firearm. More arrests are expected,” he said.

Gwala said a woman was hijacked on Friday afternoon by two armed men.

“At gunpoint they forced her out of the vehicle and threw her handbag on the ground before fleeing the scene. The vehicle was later found burnt in Grange area.

Charges of carjacking and vehicle theft are being investigated.

A security guard was seriously injured during a robbery at a primary school in Umlazi, south of Durban, on Sunday.
News
1 year ago

Christmas shoppers at the Phoenix Plaza in Phoenix, north of Durban, ran for cover as blasts went off nearby on Monday morning.
News
1 year ago

A Durban man has been arrested for house robbery after he was caught hiding in the wardrobe of the home he burglarized.
News
1 year ago
Next Article