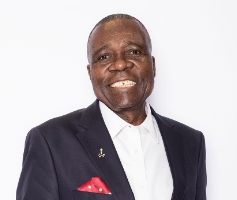 Chairman of EOH Dr Xolani Mkhwanazi, who passed away on Saturday.
Image: EOH

Dr Xolani Humphrey Mkhwanazi, chairperson of ICT company EOH, passed away in the early hours of Saturday morning. He was 64.

The company said Mkhwanazi died at the Wits Donald Gordon Medical Centre in Parktown, Johannesburg, having been admitted on December 14.

It said Mkhwanazi was appointed to the EOH board on June 5 last year, as chairperson and independent non-executive director.

Mkhwanazi was among the board members who resigned en masse from the Public Investment Corporation (PIC) in February last year.

“There is clearly a concerted effort to discredit the board of directors to the extent that there cannot be any credibility to the work that is executed in fulfilling its fiduciary responsibilities,” the letter from the directors read.

However, Mkhwanazi was reappointed to the interim board of the PIC, announced by finance minister Tito Mboweni in July last year.

“I worked closely with Dr Mkhwanazi, who played a pivotal role in helping to guide EOH towards a better future.

“Dr Mkhwanazi led the board deliberations on all group matters, but most notably during the tough deliberations around the findings of the ENSafrica investigation, commissioned by EOH, into public sector contracts,” Stephen van Coller, CEO of EOH said.

Van Coller said during this period Dr Mkhwanazi braved a difficult time, always striving to do the right thing.

“He grasped the issues and dealt with them quickly. He will be sorely missed,” Van Coller said.

Andrew Mthembu, EOH lead independent non-executive director, has been appointed interim chairperson while the board runs a process to appoint a new chairperson.

Mkhwanazi was awarded an honorary degree from Lancaster University, where he obtained MSc and PhD degrees in physics, in July last year.

Vaal University of Technology, where he was chancellor, stated that the UK institution had conferred the degree of Dr of Science honoris causa for his “outstanding leadership contributions to maths and science education development, and energy and mining business arenas, especially in SA.”

Mkhwanazi rose rapidly through the business and national ranks when he joined the Atomic Energy Corporation as a senior scientist. He then moved to the Council for Scientific and Industrial Research (CSIR) as technology transfer manager and became the CEO of the National Energy Regulator of SA (Nersa), tasked with building it into a reputable regulatory authority in Africa.

He also served as executive chairperson of the southern African arm of the global BHP Billiton resources company.