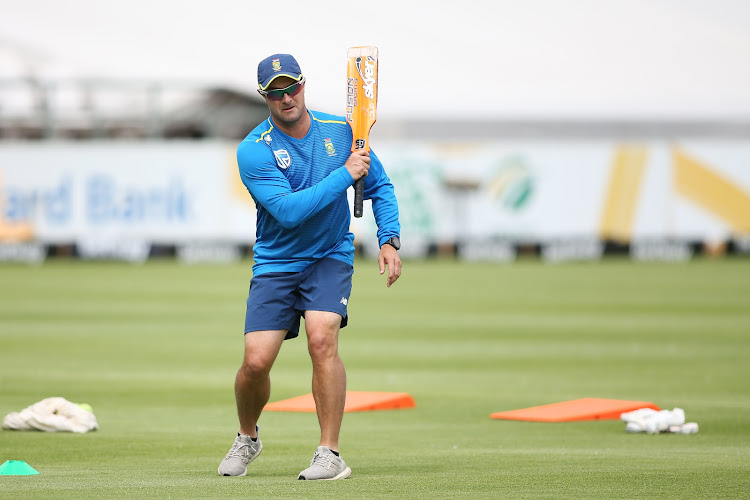 Proteas team director Mark Boucher has been on the receiving end and part of record fourth innings run chases over the years.

At this very ground in 2002 against Steve Waugh's great Australian side‚ in the game where his storied team-mate‚ captain and director of cricket Graeme Smith made his debut‚ Ricky Ponting and Matthew Hayden combined to hunt down the rather steep 334.

They did so with some ease and that remains the highest successful fourth innings chase at this ground.

With a lead of 264‚ England are 70 runs away from making the chase a record-breaking one.

They should be able to do it and with power strikers like Jos Buttler and Ben Stokes to come on the fourth morning‚ there's every possibility that SA could see flames.

But with cricket being the spiteful game that it is‚ South Africa could turn the game around with quick wickets as they'll be armed with the new ball early on Monday.

From Cape Town in 2002‚ Colombo in 2006 and Perth two years later‚ Boucher has experienced the agony and ecstasy of tall chases.

There's a fair bit of optimism from Boucher‚ but he knows the scale of the task even though the pitch lost a fair bit of its capriciousness.

“The characters have to come out and I think we've got characters in that dressing room.

"I do understand that our batters are a bit under pressure because they haven't performed like they've wanted to.

"If we can bowl them out and have a total worth chasing‚ then we must do that. We always want to go for the win‚ but good teams also block out draws‚” Boucher said.

“We'll need to have some plans‚ but you can't chase big totals without partnerships and big ones.

"If one or two of our players get into a position where they can bat long and get 100's‚ then you can start looking at totals like that.

"However‚ there's a lot of planning that goes into chasing big totals.

"Speaking to the guys who were involved in that chase at the WACA‚ they said there were times when we were under pressure and times when we transferred it. That's key to chasing big totals.”

Boucher acknowledged a successful tall chase would swell the team's confidence‚ especially at a time when the batting unit hasn't quite delivered.

“It would be a great statement‚ but more about the confidence of the team.

"If we can get a couple of our big name players to stand up and get big hundreds and a couple of youngsters can chip in around them and play some big innings‚ they'll take a lot of confidence and belief from that‚” Boucher said.

“Back in the days when we played‚ we wouldn't even think of chasing 400-odd‚ but we did in Perth and we took a lot of confidence from that.

"There's a lot of work to be done. We still have to bowl them out. If the conditions allow us to go for a chase‚ there's couple of guys in the dressing room who would love to do that.”

How did South Africa get themselves to this point?

That undid the work of Dean Elgar and Rassie van der Dussen‚ who resurrected the innings with a fourth wicket stand of 117 after an early England burst saw SA fall to 40/3.

“We got ourselves into a bit of a pickle at 40/3 then we fought really hard to get ourselves out of that. It was almost like the game was on the edge and we cracked first.

"We had a couple of soft dismissals which put us into a trying period in the game. I think we're reaping that now in being far behind in the game‚” Boucher said.

They don't lie when they say day three of a Test is a moving day as England positioned themselves strongly for a fourth-day assault.
Sport
2 years ago

The sun shone brightly and England's bowlers made hay at the Wynberg End as they reduced South Africa to 60/3 at lunch on the second day of the ...
Sport
2 years ago
Next Article