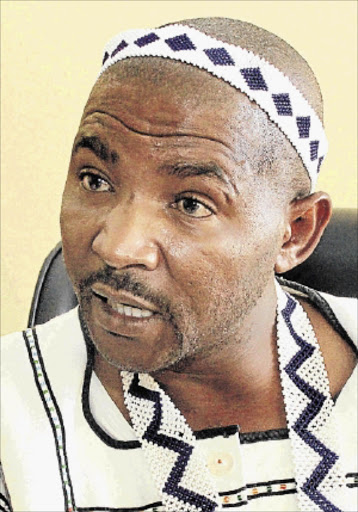 Ramaphosa visited the king on Tuesday at Nqadu Great Place near Willowvale‚ in the Eastern Cape. Sigcawu said: "We are very worried about the incarceration of Zwelibanzi (King Dalindyebo). Our hearts are bleeding. Please release Zwelibanzi now."

ANC chairman Gwede Mantashe also referred to the matter. "It affects us all. The leaders must look at the release of the king."

Ramaphosa did not address the issue of Dalindyebo's release.

Ramaphosa and Mantashe had earlier visited this royal burial site to pay respect to the late king‚ Xolilizwe Sigcawu‚ who died in 2005‚ and Xolilizwe's father‚ King Zwelidumile Sigcawu.

After the meeting‚ Ramaphosa and the king were joined by the other ANC leaders and some traditional leaders.

In the morning‚ the ANC top brass - Ramaphosa‚ party deputy president David Mabuza‚ national chairman Gwede Mantashe‚ secretary-general Ace Magashule as well as treasurer general Paul Mashile - laid wreaths at the gravesite of Walter Rubusana‚ after whom the ANC’s Buffalo City region is named. This happened in East London before their visit to Sigcawu.

Rubusana was a teacher turned reverend‚ and was one of the delegates who went to Bloemfontein on January 8 1912 to attend the inaugural conference of the African National Congress. As an experienced political campaigner‚ he was appointed to the constitutional commission chaired by Richard Msimang‚ and elected as one of the vice-presidents of the ANC‚ according to SA History.