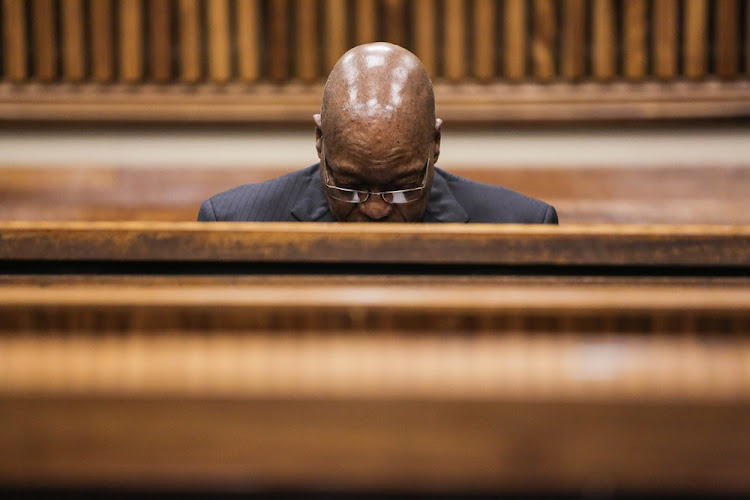 In ordering Jacob Zuma to pay costs, the judges said, 'In our view, Mr Zuma’s complaints were not genuine.' Lawyers acting for the former president were heavily criticised for using 'disrespectful language' in written submissions. The judges said an apology was not enough. File photo.
Image: Alaister Russell/The Sunday Times

Lawyers acting for former president Jacob Zuma got a judicial tongue-lashing for using “disrespectful and intemperate language” in their written submissions in their application for leave to appeal a decision refusing him a permanent stay of prosecution.

During argument before judges Jerome Mnguni, Esther Steyn and Poyo Dlwati last Friday, Zuma's counsel, Muzi Sikhakhane, apologised for the comments, which included allegations that the judges had “sanitised” facts, had “slavishly aligned” themselves to a version, and had made “gratuitous remarks” and “astonishing findings”.

In a judgment refusing the application on Friday, the judges noted the apology had only been made after the state had asked for a punitive costs order against Zuma in this regard.

“We believe we must voice our displeasure at the disrespectful manner in which the court was addressed. The apology is not sufficient.

“Such scandalous and vexatious allegations should be avoided at all costs because they can bring the administration of justice into disrepute. They do more than just hurt judges' feelings or impugn their reputations.”

Municipal officials have embarked on a “fact-finding” mission to establish whether former president Jacob Zuma’s controversial R246m homestead is in ...
News
2 years ago

They said: "It is in the interests of justice and bringing the matter to finality that no appeal should ensue.

"With regard to costs, we were mindful that in applications of this nature it is not usual to grant a costs order against an applicant. However, in our view, Mr Zuma’s complaints were not genuine."

He said another court may well agree with him. In their ruling, the three judges said Zuma had to convince them “on proper grounds” that he had a realistic prospect of success on appeal.

They said he had failed to do this.

They also ruled against a similar application by French arms company Thales, Zuma’s co-accused in the corruption trial.

Zuma can now directly petition the Supreme Court of Appeal.

The Financial Mail together with the amaBhungane Centre for Investigative Journalism on Tuesday filed papers in the North Gauteng High Court seeking ...
News
2 years ago

Municipal officials have embarked on a “fact-finding” mission to establish whether former president Jacob Zuma’s controversial R246m homestead is in ...
News
2 years ago
Next Article