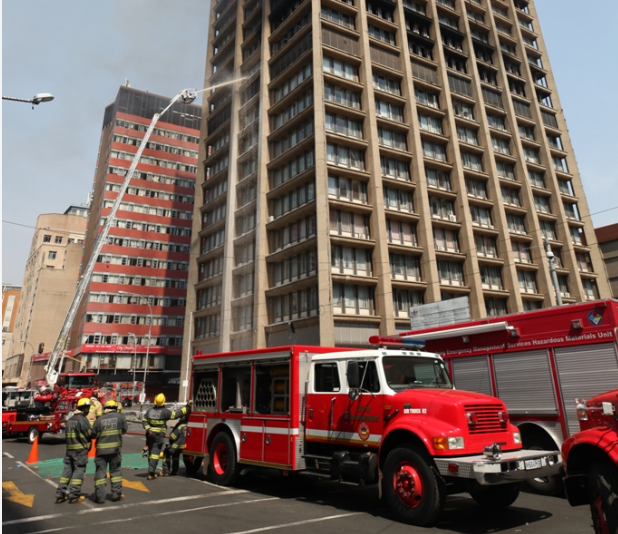 The burning Bank of Lisbon building in Johannesburg in which three firefighters died in 2018.
Image: Thapelo Morebudi

The Bank of Lisbon building in downtown Johannesburg - where three firefighters died last year in the line of duty - is to be demolished on Sunday.

The announcement was made by the Gauteng government on Wednesday.

The 31-storey building was severely damaged in the fire.

The Gauteng government said an assessment conducted by structural engineers found that the fire caused severe damage to the slabs of the burnt floors and threatened to collapse what was left of it.

“A decision was taken that the building should be demolished. The department has contracted Jet Demolition as part of a competitive bidding process to provide the implosion service,” said infrastructure and property management department spokesperson Lerato Gambu.

The department said it had measures in place to ensure public safety.

Nearly 2,000 residents in 10 residential buildings were expected to be affected.

The Gauteng government spends more than R30m a month renting properties as some of its own buildings are so derelict and unsafe they had to be ...
News
2 years ago

She said residents could only access their residences through pathways created, but no one would be allowed access to the exclusion zone.

“The exclusion zone includes everything inside Diagonal, Pritchard, Simmonds and Commissioner streets. This includes buildings, rooftops, parkings, streets and parks. SAPS will remove any persons or vehicles found in the exclusion zone,” said Gambu.

The department said contractors had completed pre-demolition works, which included decanting, salvaging, stripping of walls, ceilings and carpets, wrapping of the walls and demolition of basement floor slaps around the main structure core.

It said the site would be cleared by March 2020 and an update on what the land would be used for would be issued later.