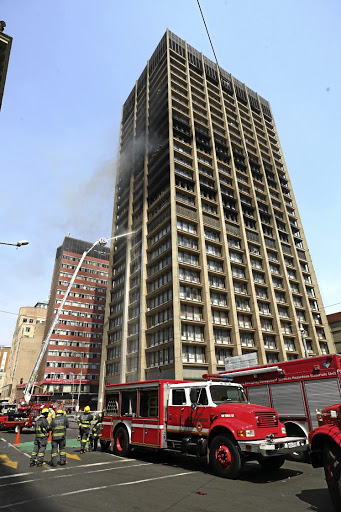 Four shop stewards have been fired by the department of health after a meeting to address concerns about the unsafe conditions of a building they are working from got out of hand.

The four were among a group of about 70 employees who attended the meeting at the building, 45 Commissioner Street, Johannesburg CBD on Wednesday for raising concerns about the unsafe conditions of the structure.

Nozipho Cele, a senior official who is among those dismissed, said she and the three others were served with dismissal letters after a dispute broke out during the meeting with management on Tuesday.

"We held a meeting to try and address the underlying issues of the unsafe building which was given to the department to use temporarily for employees who were previously accommodated at the Bank of Lisbon, after it burnt down last year" said Cele.

Cele said the meeting was to address their concerns on the condition of the building which have previously not been attended to.

Mayor Mongameli Bobani laughed hysterically as a reporter from The Herald asked him about the raid on his office and home on Tuesday.
News
3 years ago

They also raised other grievances, including performance bonuses, with management.

She said when the head of department Mkhululi Lukhele was asked questions about compliance and why the other issues were taking long to be addressed, he walked out of the boardroom.

"After he walked out on staff, we followed him to his office in an attempt to get answers and while we waited outside his office to speak to him, he called the police and claimed that we were holding him hostage," said Cele.

She said the police arrived and escorted Lukhele out of the building.

"We were not violent at any point, we just needed answers because we had been ignored for a very long time," said Cele.

Another employee who was dismissed, Godfrey Mphahlele, said: "No one harassed him.

"He walked out and decided to leave someone else to speak to us when he is a senior official who felt no need to account. We were just on the foyer close to his office and he claimed we were holding him hostage."

He said the employer rushed into taking action and as a result dismissed the workers unfairly. Tshontshi said the meeting was held between management and staff on Tuesday to address safety issues of the lifestyle building.

"The workers were also there to address issues of performance bonuses and an issue of contract workers that had been promised absorption by the department without effect.

Tshonsthi said Nehawu held a meeting yesterday with the employer to discuss re-instatement of the workers.

"We haven't reached an agreement at this point, but discussions will continue today."

Department spokesperson Kwara Kekana confirmed that four employees were dismissed by the department with immediate effect "based on serious acts of misconduct those of criminal nature, intimidation of employees and holding the HOD against his will".

Police are the most corrupt public servants: Corruption Watch report

Could intensive care at a public hospital cripple you financially?