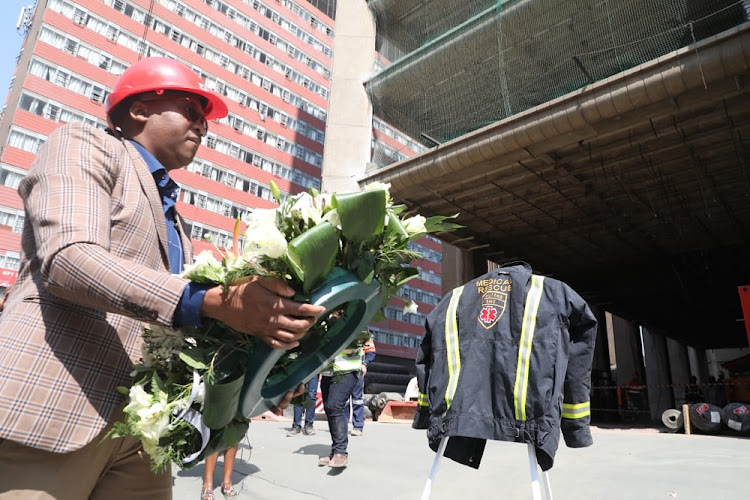 One of the families of the three firefighters who died at the Bank of Lisbon building in the Johannesburg inner city last year says it is struggling to find closure as promises made to them have not been fulfilled.

Simphiwe Moropane, Mduduzi Ndlovu and Khathutshelo Muedi died exactly a year ago at the Bank of Lisbon building during the fire that burnt for three days, causing havoc for the city and provincial government.

On Thursday, the provincial government and the City of Johannesburg remembered the fallen firefighters by laying flowers at the building, which is being cleaned ahead of demolition.

Robert Moropane, Simphiwe’s father, told Sowetan on the sidelines of the commemoration that the government had failed to fulfill its promises made a year ago.

“… they told us that they will give us a report as families so that we know  [what] actually happened. Since March, I have been calling them requesting this report. I made my last call yesterday. We have not received that report till today. We don’t know what is causing the delay,” he said.

The delay in seeing the report prevented the family from finding closure, Moropane said.  “How do you find closure when there is an open window which is bringing air inside the house? How do we find closure? How do we move on? The counselling that they spoke about that the children would get has not been done,” he said.

Moropane said since Simphiwe’s death, the mother of his children has been struggling to take care of his two daughters  - aged 14 months and four years.

Johannesburg emergency management services spokesperson Nana Radebe said the report on the fire was conducted by an external service provider and had been concluded.

“We received the report late last month. The report is with the city manager … We were also frustrated because we needed the report to know what exactly happened. It is important to us to have that report. We cannot publish the report to the public before we engage the families,” Radebe said.

The Bank of Lisbon building  housed Gauteng human settlements; health; and cooperative governance and traditional affairs departments. Workers have since been moved to another building on 11 Diagonal Street.