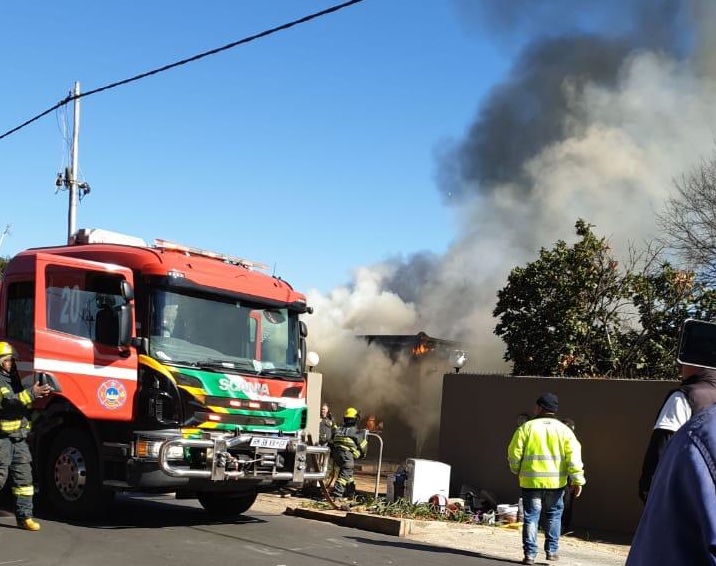 The fire engine arrived after 40 minutes. It took 10 minutes before water could be pumped out.
Image: Maggs Naidu

Memories stored in photo albums, certificates, collections of old books and paintings - everything is gone.

"Everything is gone, completely gutted. That is something you can't replace and some things can be replaced," Johannesburg resident Maggs Naidu said after his house was destroyed by fire earlier his week.

Naidu and his wife were away when the fire engulfed his Linden home. His 88-year-old aunt and an employee were at home.

The response to the blaze by emergency services has thrown into sharp focus the dire shortage of operational fire engines in Johannesburg. Naidu described the situation as a "disgrace".

When the fire broke out, Naidu said he called ADT security, which summoned the fire department.

He said one truck came from Cosmo City, about 20km away, and another from Florida, about 10km away.

So there's only two fire engines in the whole of Johannesburg. One in Cosmo City. One in Florida. Roosevelt Park has a fire station but no fire trucks. Well done @Our_DA and @HermanMashaba pic.twitter.com/nfORdHXXUi

"The neighbours all tried to extinguish the fire, but they had small fire extinguishers and the fire grew rapidly," he said.

Naidu said the fire department arrived 40 minutes later and the engine took 10 minutes to build up enough pressure to start pumping water out.

By then, the house was well alight.

Naidu said his family had received tremendous support from relatives, friends and people they did not even know.

"Even workers walking by, who have far less than we will have in our worst time, have stopped to ask if they could get us blankets or food.

"There is a sense of humanity among ordinary people from all corners of the country."

Naidu said they had temporarily relocated to the home of a family member and took their pets to his daughter in Sandton.

Johannesburg Emergency Service (EMS) spokesperson Robert Mulaudzi conceded that the city had 12 fire engines, of which only six were currently operational.

Mulaudzi said they had tried to place the engines in high-risk fire areas.

"It doesn't really address the issues in terms of response times, because we actually might have challenges getting to the incidents because of the area we are responding to.

"The matter of the shortage of fire engines is receiving the attention of the highest office in the city."

We fully agree that 12 Fire Engines are inadequate for the size of our city. We will shortly announce an unprecedented number of new Fire Engines in the history of local government in South Africa. We inherited a fraudulent tender when we took over power. Had to restart process https://t.co/2Kc8U12oFM

Naidu said it was a "disgrace" that the City of Johannesburg did not have basic services to ensure people were safe.

"It is mind-blowing and inconceivable that one of the basic things that the city has to do they are so careless about.

Times Select reported in November that there were only 10 fire engines available to service Johannesburg's 31 fire stations. A tender to supply more vehicles was halted shortly after the DA took over the municipality in 2017, owing to suspected corruption.

Of the 29 fire trucks needed, the city was able to obtain five newly built and two refurbished fire engines in 2018.

The issue of firefighting equipment was raised after firefighter Simphiwe Moropane fell to his death and his colleagues, Khathutshelo Muedi and Mduduzi Ndlovu, died on September 5 2018 from smoke inhalation during the Bank of Lisbon building fire in the Johannesburg CBD.

The Gauteng provincial government decided in March to demolish the building.

Johannesburg mayor Herman Mashaba tweeted on Thursday: "We fully agree that 12 fire engines are inadequate for the size of our city."

Power could be restored tonight in Alex after substation caught fire