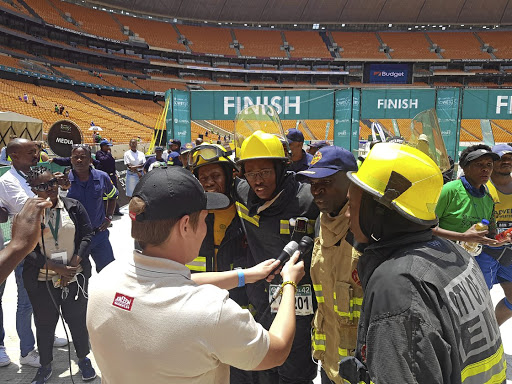 This year’s Soweto Marathon on Sunday will be live streamed on YouTube for those who don’t want to miss the action.

South Africa's premier standard marathon (42.2km) offers a huge payday of R250,000 for winners in both the men's and women's races.

Apart from the elite marathoners and the usual social runners who will be pounding the tar in Soweto, the race will see the return of fire fighters Nhlakanipho Mkhize, Siphiwe Tshabalala and Nkosi Nzolo who run in honour of their fallen colleagues and to raise awareness about the challenges of firefighters'work. The trio first entered the race last year, running in their service gear in remembrance of colleagues who died in the Bank of Lisbon fire in the Johannesburg CBD.

“This time I believe we’ll be able to better our time because we won’t be running in our full service gear,” said Mkhize adding that they want to finish the race between 4 and a half hours to five hours.

“Last year we finished the race in six hours because we had to stop multiple times and it was extremely hot.”

Mkhize said he did not need to prepare as much mentally as in 2018 because of the lessons he learned and also because he will not be wearing his fireman gear.

The Comrades Marathon Association has closed entries for the 2020 ultra-marathon after reaching the South African cap of 25‚000‚ just three days ...
Sport
2 years ago

Soweto marathon off to racing start

A founding member of the Soweto Marathon has urged more runners to compete in the 42.2km marathon to increase the appeal of the race.
Sport
2 years ago
Next Article