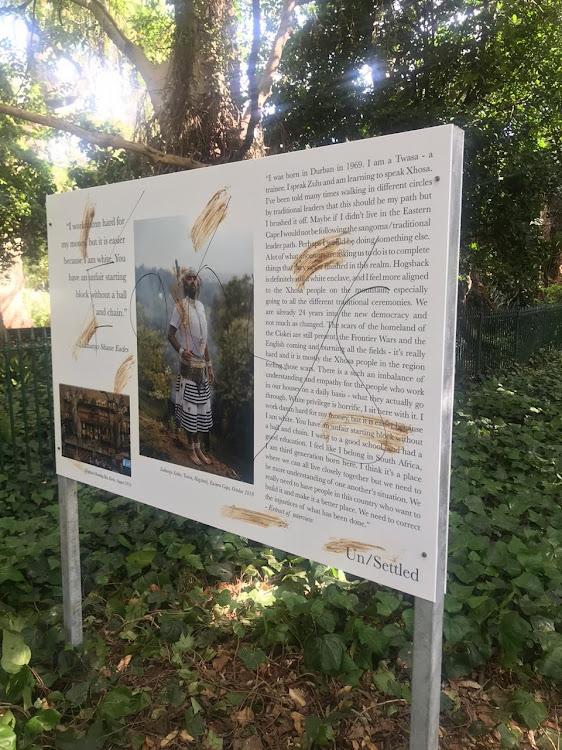 Less than a week after a series of photographs were erected in Cape Town, they have been vandalised.

The series - Un/Settled by Sydelle Willow Smith - was erected at the Company’s Garden, the historic park in central Cape Town, on Thursday. The photos were vandalised on Monday, just four days later.

The work aimed to encourage debate about whiteness and its power dynamics. Instead it was defaced with permanent markers and smeared with human feces. At least one of the pieces had the word "Fools" written on it.

“Un/Settled is a living, breathing project and I’ve always wanted it to spark conversation,"  explained Smith.

“Obviously in a social media setting, when you post this kind of work, it gets a lot of engagement - but it’s a filtered engagement. So there’s a rawness to put out work in a physical, public space."

For the project, Smith interviewed and photographed several white South Africans from different cultural and economic backgrounds. She said she had "honest conversations" with them.

One of her artwork depicts Shane Lunkhanyo Eades, a trainee sangoma, who told Smith: “I work damn hard for my money, but it is easier because I am white. You have an unfair starting block, without a ball and chain."

When the series was erected last week, Smith told TimesLIVE that it had taken her five years to put it all together. She is now faced with the burden of getting the photographs professionally cleaned.

Smith was reluctant to say exactly how much she would pay to repair the artwork.

‘My painting highlights unemployment in SA’ – artist hits back

SA artist Khaya Sineyile has hit back after Nando’s took down one of his paintings at a restaurant in the UK following complaints from customers.
News
2 years ago

She said the attack on the artwork was a clear indication of the need to have honest conversations, as many South Africans still suffered in silence.

"There’s a lot of unspoken pain and anger around conversations of identity and race in South Africa, which needs to be heard. So I am happy to be creating a platform for that. It shows the need for more work that speaks to those kind of conversations, especially in relations to white people: white artists focusing on work about whiteness,” she said.

"These acts are symbolic of the need for conversation."

Smith said she was uncertain if she would take legal action against the alleged perpetrators. “The work will remain installed for the annual Infecting The City arts festival. After that I will re-asses,” she said.

Infecting The City, one of the city's longest running arts festivals, takes place over six days and seeks to showcase an array of art forms.

“I am grateful that I have been able to do this project and received funding to have it publicly installed. I hope it is able to be further engaged in that public space,” she added.