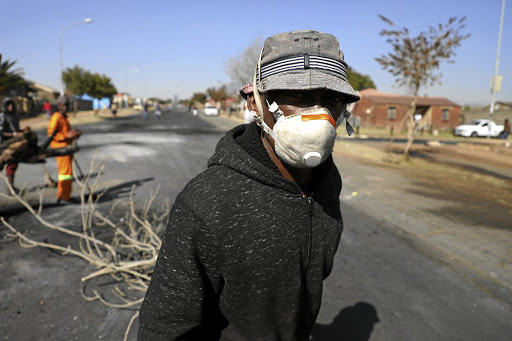 Protests over electricity in Orlando and other parts of Soweto are now a regular occurrence. /Thulani Mbele

There is sense of despair among Soweto residents over the historical debt they owe Eskom as they feel it is impossible for them to pay.

Several residents told Sowetan they were willing to pay for electricity but due to unemployment they have to live with the huge debt. Others said they simply chose to bridge their power meters to enjoy free electricity.

"I was not aware it had gone up so high. How am I supposed to get the money? I live alone in this house. I am a pensioner. I don't have that kind of money," Mike said.

He now has a prepaid meter in his four-roomed house but the debt he accumulated before the meter was installed remains and is gradually gathering interest.

In what seems like a calculated move to deflect blame for its financial ruin, last week Eskom released figures on how much Soweto owed in unpaid ...
Opinion
2 years ago

A few kilometres away, in Meadowlands Zone 7, Jabu Mbuyisa, makes a living by selling sweets. He owes Eskom about R20,000. He does not use a prepaid meter.

"Eskom people came to fix the boxes outside and switched electricity off but later reconnected it. Since then they've not returned. I can't pay the money they want because I am not working.

"Look at what I am doing for a living, to have food and ensure that my children have money to go to school. I have not paid because I don't have money to do so. If I was working, I'd have paid," said Mbuyisa, pointing the sweets on his table.

"To be honest with you, if I had to pay this money, I'd have to rob someone."

Mbuyisa also had strong views about what has been happening at Eskom over the past few years.

"It is not us who have caused problems at Eskom and made it broke. The company has hired people who worked for a very short time and the next thing they leave with millions of rands. How are we supposed to feel about that while we are struggling here?"

Dobsonville has a unique situation. Residents claim that Eskom people came and removed all the meter boxes and left them still connected.

Helen Tlhale, 68, told Sowetan since the meters were removed no one from Eskom came to tell them about the way forward. This has made residents to doubt Eskom's bills.

"If they say we owe so many thousands, how did they arrive at that figure because there is no meter to read," she said.

"Look at them," she said, pointing to pile of white envelopes, "I no longer open them".

Her box and those of many of her neighbours only have just one switch which connects the home to the grid.

Tlhale is epileptic and lives with her three grandchildren. They all survive on her grant. Her bill does not show how much they have consumed in the month or any estimates.

It just reflect the amount from the previous month and the interest charged.

SA power supply 'constrained and vulnerable' for the week ahead

There is a possibility of load-shedding this week, says Eskom
News
2 years ago

"They [Eskom] must speak the truth about what is happening. They should not be fooling us," she said.

But in eMndeni North and surroundings, residents have made a plan to enjoy free electricity.

Zandile Mbhele said the power utility people came about a year ago and disconnected her home.

"We will just live by bridging [illegal connection] until they come and arrest us," Mbhele said.

Meanwhile, more than 250 Soweto residents are headed to the high court today to seek relief over electricity disconnections by Eskom.

The residents represented by Lungelo Lethu Human Rights Foundation wants the court to force Eskom to enter into negotiations with residents before cutting power. Eskom says Soweto owes it R18bn.