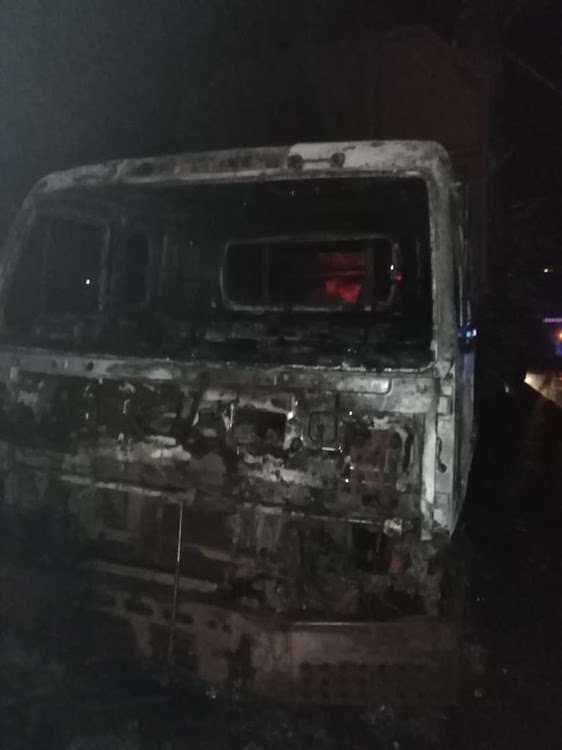 A truck was set alight on the R102 near Empangeni in the early hours of Monday morning. The driver is believed to been seriously burnt and is in hospital.
Image: Supplied

Ongoing violence within the trucking fraternity continues to spiral out of control, despite police and government efforts to address the issue.

A number of truck torching incidents throughout the country have been reported on social media after a nationwide truck protest moved into full swing on Monday.

On Sunday KwaZulu-Natal transport, community safety and liaison MEC, Mxolisi Kaunda, called for truck drivers to be patient and not embark on actions that result in the damage of property. This followed rumours of the nationwide shutdown.

KwaZulu-Natal police said they had arrested 20 individuals who are believed to have been involved in activities relating to trucking violence.

On Sunday, 11 suspects were arrested at Richards Bay SAPS for public violence and obstruction of traffic after the road to Richards Bay harbour was blocked by trucks.

That same evening, four suspects were arrested in Durban for possession of an unlicensed firearm with 15 rounds of ammunition.

On Monday, five suspects were arrested at Estcourt near the Shell Ultra City after the vehicle in which they were travelling was positively identified in a case where a truck was set alight.

A KwaZulu-Natal truck driver was killed in yet another brutal attack in the province on Monday.
News
1 year ago

The suspects were found in possession of a range of apparatus including unlicensed firearms and ammunition and bottles containing petrol.

TimesLIVE is in possession of a recorded telephonic conversation between a logistics company owner and an individual who claims to be from the All Truck Divers' Foundation (ATDF).

In the recording, the ATDF representative can be heard threatening the owner of the truck, telling him he would not let his driver load because he is a foreign driver. The heated conversation goes on for nine minutes as the men continue to argue and debate.

The case between the two aggrieved parties was recently heard in the Pietermaritzburg high court, where PFSF sought a high court order against ATDF to stop them from harassing, threatening or assaulting truck drivers or causing damage to the trucks.

ATDF leader Sipho Zungu said he was unaware of the recording, but if the person who threatened the owner claims to be representing ATDF, he should be arrested.

"That person needs to be traced and arrested because there is an agreement in place and we have obeyed that agreement," he said.