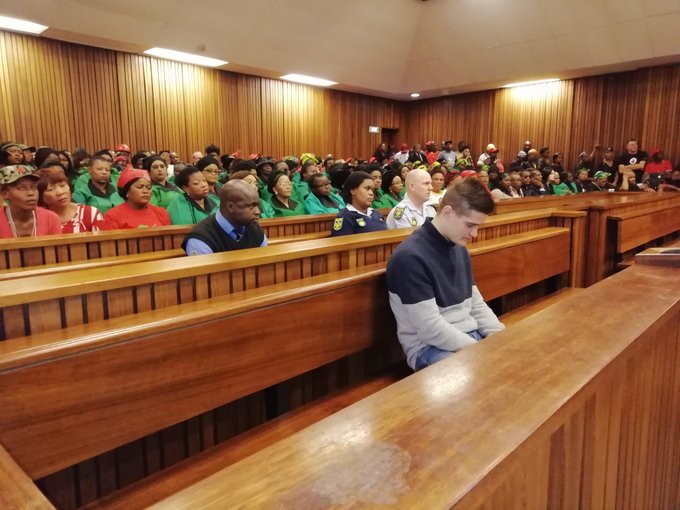 Nicholas Ninow ahead of his rape conviction in the Pretoria High Court on Monday.
Image: Nomahlubi Jordaan

That was the sentiment as activists and organisations reacted to the 21-year-old being convicted of rape, defeating the ends of justice and possession of drugs by the Pretoria high court on Monday. He was acquitted on a charge of assault.

Ninow raped a seven-year-old girl in the women's toilets at a family restaurant in Pretoria in 2018 after consuming alcohol and drugs, an act that generated outrage across the country.

"We are very happy Nicholas Ninow has been finally found guilty. What we are looking forward to is that, when the court resumes, nothing less than a life sentence is given to him," said #Notinmyname movement spokesperson Themba Masango.

Nicholas Ninow has been found guilty of raping a seven-year-old girl in the bathroom of a family restaurant in Pretoria.
News
2 years ago

Michiel Jacobsz, of Women and Men Against Child Abuse, welcomed the judgment: “We were quite happy with the guilty verdict. We hope for nothing short of a life sentence as prescribed by law. There is no excuse for child rape.”

“We will be calling for a minimum prescribed sentence of life imprisonment to be imposed by the court,” she said.

Ninow is due back in court on October 16 for sentencing proceedings. His lawyer, Herman Alberts, asked for the postponement for a probation officer's report to be prepared.

"It's time that everyone takes up women's issues seriously. We are not numbers we are human beings."
News
2 years ago

Nicholas Ninow changed tables at the Dros restaurant where he raped a seven-year-old child so that he could be closer to the kiddies' corner.
News
2 years ago
Next Article