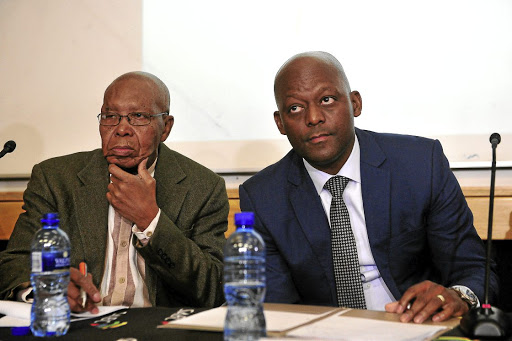 FILE: Joe Thloloe and SABC board chairperson Bongumusa Makhathini at a commission of inquiry into editorial interference at the public broadcaster.
Image: Veli Nhlapo

Veteran journalist Joseph ''Joe" Thloloe has described how an environment of fear‚ anxiety and helplessness plagued the SABC under the leadership of Hlaudi Motsoeneng.

Thloloe‚ who has worked in the media for more than five decades‚ chaired a commission of inquiry into interference at the SABC‚ which made its findings public last month.

He appeared before the state capture inquiry on Friday to discuss what he had found over his year-long investigation into the public broadcaster.

"The first major finding was that in the five years that we were investigating‚ the SABC suffered from a capricious use of authority and power to terrorise staff and to deflect the corporation from its mandate and editorial policies‚" Thloloe said. "The evidence we got didn’t show a pattern; it was just somebody who was in power who would use it. It was a very frightening world where people were bullied‚ thrown around and pushed around."

He said he found an organisation "crippled by pain‚ anger and fear; by frustration‚ anxiety and apathy; by inattentiveness‚ detachment and helplessness".

"A witch hunt for enforcers wouldn't heal the corporation‚ the wounds were very deep. It would just divide an already fractured institution.

"The painful part with abuse is that the abused themselves turn against each other and it becomes much more vicious at that level. What we found was that one person would point to another and fingers were pointed in all directions. That was the tragedy we found at the SABC‚" he said.

However‚ Thloloe could find no direct link between the SABC newsroom and the ANC.

"There were suggestions that the ANC had captured the SABC but we found nobody who could come and say‚ 'I got instructions from Luthuli House‚'" he said.

"So we found no evidence of a direct link between decisions at ANC headquarters and decisions in the newsroom‚ but the spectre of the ANC hovered over the newsroom.

"When the minister of communications (then Faith Muthambi) did ANC constituency work in KwaZulu-Natal‚ journalists were forced to cover her every time she was out there."

It also recommended that all newsroom staff attend at least one workshop a year on editorial policies and that a news and current affairs advisory committee be established.