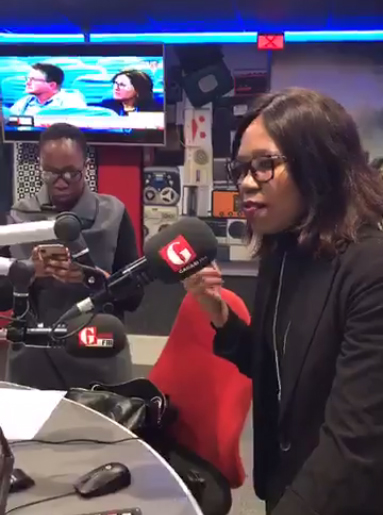 It appears Njabs Zwane, the producer of the morning show, and Bright Ntuli, a sub-editor, were reacting to the news that has gripped the country of the death of  University of Cape Town student Uyinene Mrwetyana and showing their ire at the situation that has seen so many cases of femicide prevail in this country.

They were echoing, some might say, the frustrations and fears of many women in this country.

All of this was captured on the show’s Facebook live feed. While discussing the issue of femicide, Zwane reminds the listeners of the case of Thembisile Yende, an Eskom employee who was reported missing and later found dead at her place of work.

A visibly emotional Zwane goes on to say: “Now you try tell me we are safe at work, when our colleagues are part of the problem and kuqala kancane (it starts small) with behaviours people think are okay.  Ukungi phansa (slap me on the bottom) making lewd comments about my body, ukungilandela hlampe masekumnyama ngiya emotweni (to follow me after dark when I go to my car), ukungigada ukuti ngisebenza kuze ku shaya unine ebusuku ngedwa (watching me and noting that I work until 9pm alone). Kuqala kancane(it starts small).

The Uprising on Gagasi FM

“I’m at a point where I am tired and I am scared and I’m sick and tired of being sick and tired for myself and for every other woman that wakes up not knowing whether meya emsebenzini uzobuya yini. (will she come back from work). So today, respectfully and with pain in my heart, I want to say that if KZN men want to continue living in a world with no women, if south African men want to continue working and living in an environment that has no women, it’s fine.  I am removing myself. I’m out. Bonani (see what you do) thatani umhlaba wena nihlale ninodwa (take your earth and live alone),"  she says as she gets up.

Her flabbergasted co- star Hlope asks if she’s leaving right at that moment as she packs her bag.

“You know what guys, I don’t think people understand what we as women go through every day. It becomes so difficult for us to do things that seem normal to you. Going out, going jogging you never think about that, ukuthi ubani engizohlangana naye (who will I meet?) what is going to happen to me? Do I need to get pepper spray? Do I need to carry my Taser when I go jogging?  But we need to think about those things. And now if you can’t be safe at your own home at work even at the fricken post office then what are we doing?  I’m out too.” Ntuli says.

Ntuli and Zwane then walk out of the studio.

Gagasi responded on the breakfast show’s Facebook with a short statement expressing that they support the walkout by the women.

"We acknowledge the walking off air by Njabs and Bright from #TheUprising. Both ladies are well and receiving adequate support. We also stand in full solidarity with them and the women and children of KZN as they continue to be unjustly harassed and murdered. This needs to stop! #Sesikhathele."