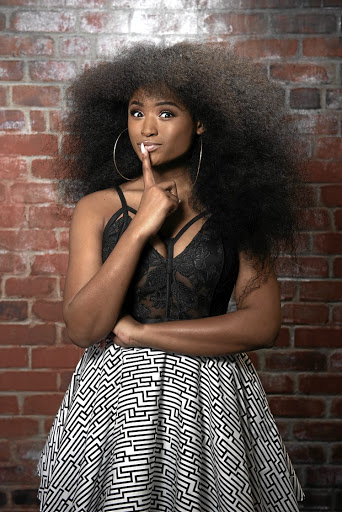 Starlet Nomalanga "The Flame" Shozi is ready to blaze a trail in showbiz in what she is calling the biggest year of her career.

Who can blame her, with a number of exciting TV gigs lined up?

Known for her bouncy voluminous Afro, we connect when she's at the dentist. Shozi immediately warns me in a soft voice that she's filling her doctor's appointment form before she reveals that she has a throbbing toothache from hell.

"It's definitely going to be my biggest year yet with all these wonderful things happening in my career, all at the same time," she says excitedly.

"I mean, I will reap the rewards when I'm a millionaire. I still need more money," she adds with a chuckle.

The 24-year-old beauty ended 2018 on a high note when she was unveiled as the face of BET Africa. One of her first duties was attending the Soul Train Music Awards in Las Vegas, US, in November.

"It's just taking things to an international level and representing Africa on that level.

"I never thought I'd be in a position to be interviewing people like Faith Evans, SZA and Erykah Badu.

"It was everything that I dreamed of. I did the MTV Europe Music Awards when I was still at MTV Base last year, but the Soul Train Awards were just on another level."

Last week Shozi was introduced as the host of celebrity news show BET Breaks airing weekly on the channel on Mondays, Wednesdays, and Fridays at 5pm.

Later this month she makes her long-awaited return to e.tv soapie Rhythm City as vixen Nomalanga. Viewers have been edgily waiting for the aftermath of her character stealing Lerato's (Samkelo Ndlovu) baby to unravel.

"She's a bad b***h again, which is great because that's how people were first introduced to her. A lot of people hate that character, but it's fun and it will give a lot of people closure. People still ask me 'when are you returning the child?'."

"We shot it in Durban, which is like my favourite place in the world. The character I play is very wild, so it was crazy getting into that role. It was great to play someone that's sexually inclined and very confident with her sexuality. I want to do more movies."

Due to her busy schedule she had to leave her radio job on Durban-based Gagasi FM and move to Joburg full-time in November.

Shozi is one of 13 children and was born in Port Shepstone, on the south coast of KwaZulu-Natal.

"My dad is a rolling stone. I love him though. I mean we didn't all live together, but just having them in my orbit was really cool."