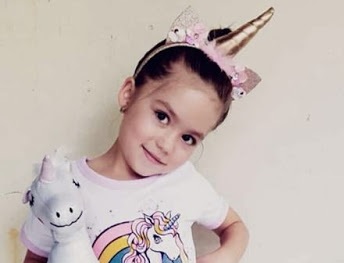 Amy-Leigh de Jager's grandfather has described how her kidnappers became angry when the ransom was not paid.
Image: Supplied

Amy'Leigh de Jager's kidnappers were prepared to settle for R1,000 to cover transport costs and R5,000 in cash, as the net closed in on them.

This was revealed on Thursday by the child's  grandfather, Martin Brouwer.

Three suspects were arrested by police overnight in connection with Amy'Leigh's  abduction, one being a teacher at her Vanderbijlpark primary school.

Four men had grabbed the grade R pupil from her mother, Angeline, at the Laershool Kollegepark shortly before 8am on Monday. They bundled her into a white Toyota Fortuner before speeding off.

Police swiftly began an investigation and the Vaal community rallied around in support of the family. Amy'Leigh was reunited with her family about 19 hours later, after being dropped off in a street in the same suburb.

Angeline is a stay-at-home mother and her husband Wynand is a school teacher.

Shortly after Amy'Leigh's kidnapping, they received a ransom demand of R2m - an unaffordable sum for the middle-class family, Brouwer told TimesLIVE.

Speaking after news of the arrests broke on Thursday morning, Brouwer described how the extended family had tried to support Amy'Leigh's parents during the time she was missing.

6-year-old Amy'Leigh de Jager was kidnapped in front of her school gate on September 2 2019 by four men and loaded into a white Toyota Fortuner. Her grandfather, Martin Brouwer, spoke out about how the ordeal impacted their lives and describes the relief the family felt when they saw Amy’Leigh for the first time after the incident.

The ransom demands were made during brief phone calls, he said, with the family given limited time to respond.

He described how the ransom amount rose and fell.

Brouwer said, "They got upset when no money was paid, swore at Angeline and put the phone down.

"There was not the amount of money they demanded just floating around."

As the hours ticked by, there were more calls.

The community of Vanderbijlpark is shocked at the news that a teacher is among the suspects arrested in connection with the kidnapping of ...
News
2 years ago

Nineteen hours after Amy-Leigh de Jager was abducted from her Vanderbijlpark school, she was given R4 "to buy water" and dropped off in the dark ...
News
2 years ago
Next Article