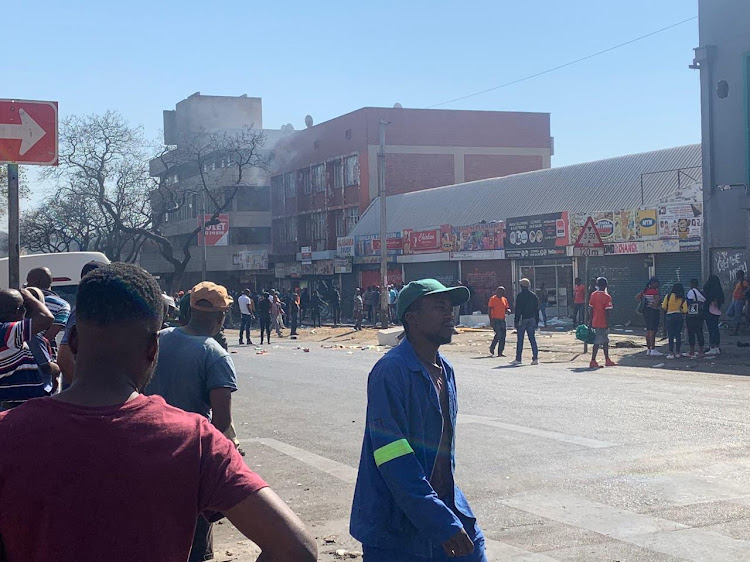 Police used stun grenades and rubber bullets to disperse the crowd. Several roads in the area were blocked.
Image: Sipho Stuurman via Twitter

Several shops were looted and destroyed as violence erupted in the Pretoria CBD on Wednesday morning, police said.

Police spokesperson Capt Augustinah Selepe said the violence broke out at about 8am.

It was alleged that angry taxi operators took to the streets to “deal” with alleged nyaope addicts in the area.

This comes after a taxi driver was killed during a protest in the inner city on Tuesday, after taxi operators tried to forcibly remove alleged drug addicts from the streets.

Police used stun grenades and rubber bullets to disperse the crowd on Wednesday.

Several roads in the area were blocked off.

“The situation is getting tense, but are police are there. We urge the shop owners to close their shops as a matter of urgency,” Selepe said.

Police confirmed on Tuesday that a group of taxi drivers had been complaining of drug addicts at the Bloed rank.

[WATCH] .@etvNewsSAz cnr Lilian Ngoyi and Steuben str. In #pretoriacbd. That’s where everything is happening. Foreign nationals who we’ve spoken to are terrified and in fear. Some shops have been burnt as well. #firefighters trying to enter the scene are being chased away. pic.twitter.com/4V221Hd12d

Some of the shops that are currently engulfed in flames. No fire department in sight as they were chased away earlier #PretoriaCBD @TeamNews24 pic.twitter.com/0zddalJwCA

#PretoriaCBD just took this now 8 seconds is all I could get ?? buildings getting burned down by angry protestors pic.twitter.com/PtmA2sYNua