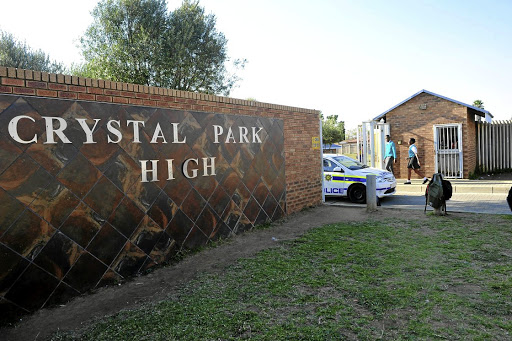 Drugs were allegedly found in a teacher's bag at Crystal Park High in Benoni. /Veli Nhlapo

A grade 8 teacher has been suspended from school and faces disciplinary action after nyaope was allegedly found in his bag during a police raid.

The 58-year-old teacher at Crystal Park High School in Benoni, on the East Rand, was suspended on Thursday following the alleged incident.

He allegedly confessed to giving his bag to a pupil who was caught by police with the drugs. Three other pupils were also suspended after they were allegedly found in possession of drugs.

Sekele said police were waiting for laboratory results to confirm the drugs. She said the teacher had not been arrested but investigations were under way.

The teacher now faces disciplinary action but parents of pupils at the school are concerned that he has not been arrested.

According teachers who spoke to Sowetan on condition of anonymity, the teacher claimed he had confiscated the drugs from pupils two days before the police raid and kept them in his bag.

"He admitted in front of the principal and police officers... His story does not add up. We should not protect him when over 600 lives of learners are being compromised by his behaviour," said a teacher.

A parent at the school said the teacher was previously demoted from teaching grade 12 to grade 8 for alleged misconduct.

"The teacher has been seen smoking cigarettes in front of learners and has developed a wrong relationship with them," said the parent.

Cassper and AKA to perform together for nyaope awareness

Okay, so it's not a reunion or collabo. but hey, it's for a good cause.
Entertainment
3 years ago

A grade 12 teacher told Sowetan the school had been battling with a problem of violence and pupils abusing drugs.

"We catch learners with dagga, nyaope and cigarettes everyday. It is very difficult to manage them because most of these learners do not stop bringing them to the school," she said.

The grandmother of the 17-year-old learner who was found with the teacher's bag was disturbed by the incident.

"The school called me and told me what happened but I still don't understand how a person entrusted with the care of our children will put a learner in such a compromising position," said the grandmother who cannot be named to protect the pupil.

"My grandson told me he didn't know what was inside the bag and had merely taken an instruction from a teacher who asked him to put the bag in his [teacher's] classroom."

Gauteng education spokesperson Steve Mabona said the department supported the decision of the school governing body to suspend the teacher and that officials were working closely with the school on the matter.