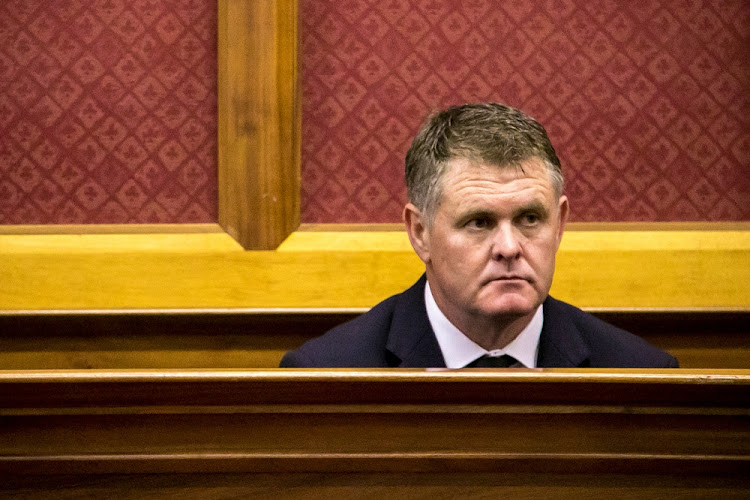 Cape Town high court judge Gayaat Salie-Hlophe told Rohde on Thursday that he would remain behind bars‚ even though the Supreme Court of Appeal had granted him permission to appeal his conviction and sentence.

In legal papers‚ Rohde asked Salie-Hlophe‚ who presided over his trial‚ to release him on bail as the appeal court might only hear his case in February.

The former Lew Geffen/Sotheby’s CEO said he was bankrupt and wanted to rebuild his life pending the appeal hearing.

Rohde is serving a 20-year sentence for murdering his wife‚ Susan‚ and for defeating the ends of justice by attempting to make her death look like suicide.

He killed Susan at Spier estate‚ Stellenbosch‚ in July 2016 in a room they shared while he attended a work conference. They have three children.

Susan was found dead with a hair-iron cord around her neck behind a locked bathroom door.

Judge Gayaat Salie-Hlophe described the murder as "callous, brutal and shocking" as she handed down the sentence.
News
2 years ago

Salie-Hlophe sentenced Rohde in February‚ after a lengthy trial that exposed his extramarital affair with a colleague and the fights he had with Susan over his cheating.

“I have been incarcerated for a period of eight months since November 8 2018. The prejudice in terms of caring for the emotional and financial needs of my three children‚ as set out hereinafter‚ as well as rescuing and/or salvaging my business has been immeasurable‚” Rohde said in court papers.

“It is therefore against the aforesaid background that I beg the leave of this court to consider this bail application favourably‚ as soon as possible.”

The court refused him bail in November‚ shortly after he was convicted.

In the papers‚ Rohde said one of his daughters‚ who was supposed to testify on his behalf‚ could not do so because Salie-Hlophe amended a previous order that would have allowed her to testify in camera.

“I point out that‚ during the two and a half years since I was arrested‚ my three daughters and I have constantly and unrelentingly been in the media spotlight‚ which has significantly affected my daughters and their willingness to testify in open court and be subjected to being photographed by the media‚” continued Rohde.

Wife killer Jason Rohde’s selfishness could land his children on the streets.
News
2 years ago

“My daughter … who had expected to be testifying in camera‚ became distraught - resulting in her becoming tearful and clearly not emotionally fit to testify on my behalf. Accordingly‚ I instructed my legal representatives to have her withdrawn from the witness stand.”

Rohde said he believed his appeal had a good chance of success.

“I am advised and verily believe that another court considering the record of the proceedings and the judgment could come to a different conclusion and finding in respect of the convictions as well the sentences imposed - and accordingly I am advised by my legal representatives that there are indeed good prospects of success on appeal against both my conviction and sentences imposed‚” he said.

The state opposed the bail application.

Prosecutor Louis van Niekerk said Rohde’s application contained no new facts. “That leave to appeal has been granted [does not] mean he is entitled to bail‚” he said. “What was placed before the judges of the SCA was not the full record. They have not sent it back to a full bench‚” he added.