A cop and a pilot walk into a bar ... and walk out sober after a few ciders 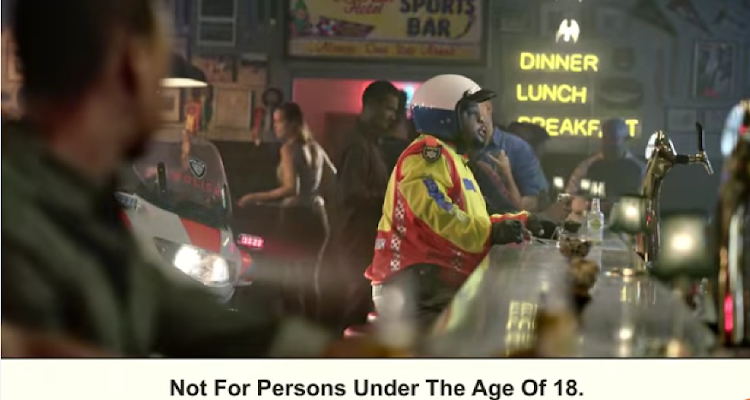 Should drinks with less than 0.5% alcohol content be considered “non-alcoholic?”

This question came under the spotlight at the Advertising Regulatory Board (ARB) after two individuals lodged complaints about a Savanna cider TV commercial.

The advert showcases a new “non-alcoholic” cider, which in fact contains 0.3% alcohol.

Under South Africa’s legislation, this “non-alcoholic” label is in fact legal, and in accordance with the Liquor Products Act which states that drinks with less than 0.5% alcohol are considered “non-alcoholic”.

The opening scene of the commercial shows two men sitting at a bar drinking. Two patrons react in a surprised way when a traffic officer in uniform rides to the bar entrance on his official motorcycle. The officer orders and drinks what appears to be an alcoholic drink. He briefly looks at the two patrons and then rides off.

One patron comments: “That’s a bit unconventional”, and the other responds “Mm-hmm Savanna with no alcohol. Breaks all the rules.”

They glance over at a pilot dressed in uniform, sitting behind them also drinking from a bottle similar to theirs.

The incident happened at the Douglasdale police station.
News
2 years ago

The words: “Not for persons under the age of 18” appear at the bottom of the screen throughout the commercial.

In the final shot, the words "new non-alcoholic", "the rules don’t apply" and "Savanna, the unapologetic cider" appear on the screen.

The first complainant submitted that the commercial portrayed the cider as non-alcoholic, when it actually contained alcohol.

He said it wrongly sent a message to the public that even someone on duty could consume such a product. He said the disclaimer “Not for persons under the age of 18” - makes Distell Limited’s claim that it is non-alcoholic, questionable.

The second complainant said the advert was misleading as it contained 0.3% alcohol and  painted a confusing image of a traffic officer drinking an alcoholic drink and then riding a motorbike.

Distell Limited said the product contained no more than 0.3% alcohol by volume.

'Drunk driver' arrested after ploughing into pedestrians in Pretoria

A motorist is in custody after allegedly ploughing into four pedestrians, killing two of them, in Temba North in Pretoria.
News
2 years ago

It said in terms of the Liquor Products Act, an alcoholic beverage is defined as a product with the alcohol being above 0.5% by volume. Distell contended that products with less than 0.5% alcohol were not considered alcoholic or liquor products in terms of the legislation.

“The commercial does not in way suggest over-consumption or irresponsible consumption,” it said, adding that it included responsible messaging to promote the product to adults and avoid an underage appeal.

The ARB said it could not make a ruling that contradicts legislation.

“The directorate nonetheless has discomfort with the advertising of products which contain a small amount of alcohol as ‘no alcohol’ or ‘0%’ alcohol. It accepts that legislation allows for these products to be labelled as ‘non-alcoholic’ and to declare the actual alcohol levels,” it said.

“The directorate is also aware that some consumers will not wish to drink even trace amounts of alcohol – including recovering alcoholics and people who do not drink for religious reasons.”

Nonetheless, the ARB said it could not ignore that a committee of industry had twice before accepted the practice of calling products with legally acceptable alcohol limits as “alcohol-free”, “non-alcoholic” and even “0% alcohol”.

However, it would feel more comfortable if the commercial contained a disclaimer – along the lines that the product contains 0.3% alcohol or “trace amounts” of alcohol.

“If this were the case, there would be no argument that any consumer was being misled,” it said.

“It becomes crucial in this regard that the material in question is a television commercial. The viewer does not have the luxury of consulting the packaging for clarity until they have in fact responded to the advertisement and gone to the retailer. By this time - even if they now elect not to buy the product – they have arguably been misled.”

The ARB said the “under 18” disclaimer was not misleading, or dishonest and was not in contravention of the Code of Advertising Practice. It found that the portrayal of a traffic officer and a pilot was part of the twist in the plot, and was not irresponsible.

“The intended message is to encourage consumers to be responsible, by opting for a non-alcoholic drink,” it said.

“A reasonable adult viewer would, on seeing the whole commercial, understand that it is promoting a drink that is non-alcoholic, and therefore allows drivers to consume it without the danger of becoming intoxicated."

The commercial was found not to be in contravention of the code of advertising practice.