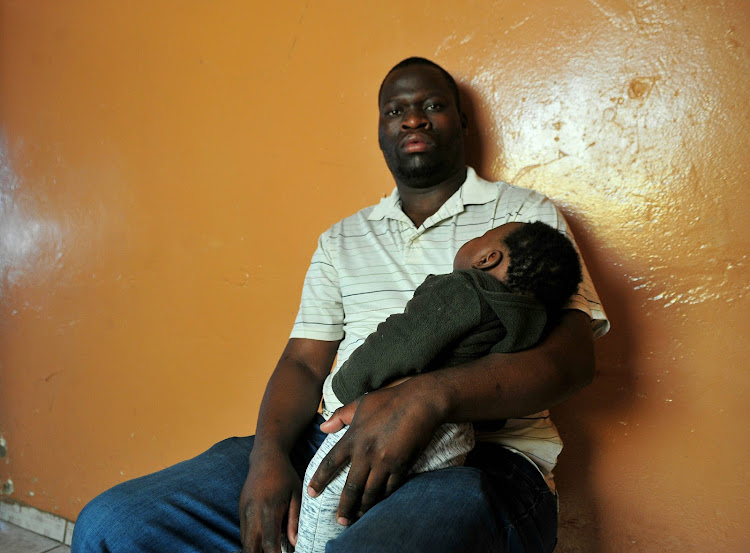 Thobani Khanyile searched for his son until he found him
Image: Veli Nhlapo

A three-month-old baby was rescued before he could be sold off by his uncle who allegedly raped and killed the child's mother.

The baby was found by his father, Thobani Khanyile, on July 20 in Tshepisong, on the West Rand, 40 days after he was abducted from his home in Zola North, Soweto.

The baby's mother, 26-year-old Nonhlakanipho Lukhozi, was found murdered and her body dumped in Jabulani, Soweto, on June 11. On July 22, Khanyile identified her body at a government mortuary.

Khanyile, 30, said he could not reach Lukhozi on June 10 as he had been held at the Germiston police station for shooting someone at the time. He was released on bail on July 3.

"I called Noni [Lukhozi] on June 10 because our child was due for his second appointment at the doctor but she wasn't picking up the phone," Khanyile said.

He said her phone was later switched off. He asked his cousin Xolani Mkhize to check on her to make sure that she was fine.

Mkhize has since been arrested after allegedly confessing to Lukhozi's murder.

A Port Elizabeth woman was raped repeatedly for six hours after being abducted and held hostage by two knife wielding attackers that were trying to ...
News
2 years ago

"He said she wasn't home and none of her belongings were there. I got worried because it sounded like she ran away with our child. It would have been out of character for her to do that," Khanyile said.

"The first thing I did when I was released on bail was to look for her everywhere. I went to Alexandra and Soweto and I couldn't find her. That's when I went to the Jabulani police station to report her missing."

According to Khanyile, Mkhize was the last person to have seen Lukhozi alive.

"Xolani killed Noni because they wanted [to sell] my child in Nigeria. I know his girlfriend had a child who was younger than mine. We heard that they sold him off as well."

Khanyile said he went to inquire at the house where Mkhize's girlfriend lived after one of his relatives informed him that she had arrived with a baby which was older and bigger than hers.

"According to my cousin, she didn't want anyone to see the baby even though she claimed it was hers. I went to her house in Tshepisong on July 20, and confronted her; she seemed scared and was shaking," Khanyile said.

He left but waited outside until he saw her leave the house. He followed her to another house where he suspected the child was being kept.

"She went inside and came out with a friend, who was carrying a baby and I could see that it was Sibusiso, my son. They spotted me at the gate and ran behind the house.

Khanyile scaled the wall fence and gave chase but could not catch up with Mkhize's girlfriend.

An Eastern Cape mother who allegedly forced a girl aged 14 to marry an older man - and then accused her of shaming the family when she ran away - ...
News
2 years ago

"A man on the street told me that she ran past him, but the friend who had the baby had ran into one of the houses; he pointed it out to me. I went in and found my child hidden in a shack," he told Sowetan.

"I took the baby and went to the Jabulani police station because I suspected that his mother was dead."

Khanyile then asked the police to take him to a government mortuary to look for Lukhozi.

"They took me to Diepkloof government mortuary and I finally found Noni," Khanyile said. He has not seen or heard of Mkhize's girlfriend who is believed to be on the run.

A police source, who saw Mkhize's confession statement, said Mkhize said he raped Lukhozi before stabbing her in the neck and chest, and strangled her.

"He [Mkhize] then loaded the body into a wheelie-bin and dumped it in the veld. He also took all her belongings, including the baby's birth certificate and clothes and burnt them."

Mkhize appeared in the Protea magistrate's court on Thursday on a charge of murder and was remanded in custody.

Cst Dakalo Phemula said the matter had been referred to the provincial Director of Public Prosecution for a decision on additional charges.