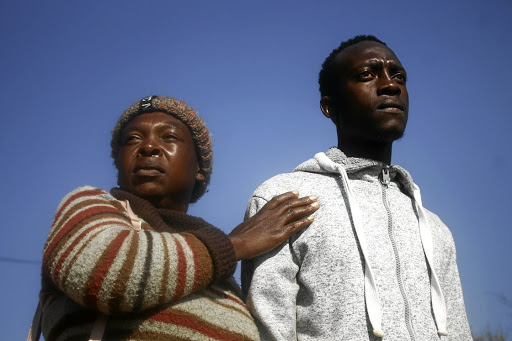 Thabang Morod, the father of baby Mpumelelo who was abducted but soon found in Diepkloof, attended court where the suspect appeared.
Image: KABELO MOKOENA

The family of the Soweto woman who allegedly abducted a newborn baby wants her to feel the wrath of the law.

Kereleng Ramoisa, 29, was arrested on Friday morning after she was apparently found with baby Mpumelelo at a house in Diepkloof, Soweto.

The baby had been abducted from the maternity ward at Chris Hani Baragwanath Academic Hospital a day before.

The family said they called police on Ramoisa after they found her with the baby. The woman had apparently miscarried twice in the past.

Her sister Brenda said she was shocked when Ramoisa requested her to bring baby formula and some baby stuff on her way from work.

"She said 'I have given birth and I cannot go out and buy for myself'," she said.

"When I got home I found her carrying a newborn baby and I asked her when was she ever pregnant."

Brenda said she called Ramoisa's boyfriend who also didn't know anything about the alleged pregnancy.

"Two weeks ago she had tried to commit suicide, so we were just confused," she said.

She said the baby was crying uncontrollably.

"I said to her 'breastfeed the baby if it's yours', but she said the hospital said she should not breastfeed. I got suspicious," said Brenda.

She said after hours of the baby not being fed she could not wait for the morning to come, so they called the police.

Another of her sisters Thabile said Ramoisa has brought their family shame and embarrassment.

"We live with her and she stays in an outside room in the yard," she said.

"Where does she get such cruelty to steal someone's child from hospital?

"I've asked her several times in her jail cells to tell me why and who she did this with but she won't speak," said Thabile, adding that her sister must feel the full might of the law.

Residents of Diepkloof who attended the court case yesterday also called for justice to be served on Ramoisa.

"How can a young person like this be part of such a painful act, we want to know why she did it," said a resident.

Her friend, who did not want to be named, said she was disappointed at Ramoisa's alleged criminal act.

"I still don't wanna believe it because I did not know she was capable of stealing a child. If she wanted a baby so bad why didn't she go to fertility experts?" she said.

Ramoisa will appear in court for a formal bail application tomorrow.