'I feel like I was responsible for my son's death' 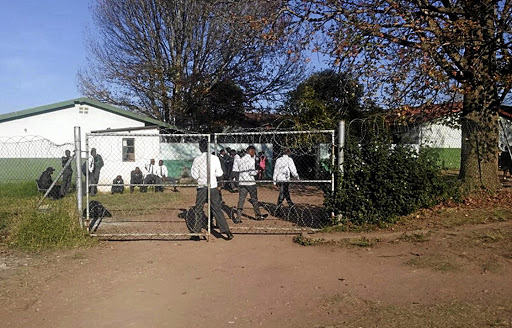 Classes have resumed at Ukusa after being closed for a week after the murder of two security guards. / SANDILE MOTHA

The distraught father of one of the security guards who were ambushed by thugs and beaten to death is battling to come to terms with the tragic loss of his son.

Mncedisi Ntuli, 29, and Thandazani Majola, 46, were killed while on duty at Ukusa Secondary School which is located in Hammersdale township outside Durban. It is believed that unknown assailants forced entry into the school on Wednesday night.

They then demanded keys to the computer lab but met with resistance from the guards. The thugs eventually overpowered and assaulted them to death with a crowbar.

Mncedisi's father, Thembinkosi Ntuli, said he now regrets encouraging his son to look for a job as a guard.

"His passion was to become a teacher and he was in his third year of a BEd degree. I told him to consider becoming a security guard so that he can pay for his studies and be able to support us and his two kids," he said.

Ntuli said his son was killed on the first day of commencing his duties as a guard.

"His death will stay with me forever. He had not completed his security guard course but I insisted that he must look for employment, that's when he was hired by the school.

The principal of a KwaZulu-Natal high school made a shocking discovery on Thursday when he stumbled upon the lifeless bodies of two security guards ...
News
2 years ago

"I'm full of regrets, deep inside me I feel like I was responsible for his death."

The tragedy at Ukusa Secondary School happened at a time when the KZN department of education announced that it was going to be deploying more than 3,500 volunteers who will be dispatched to schools as security guards.

They will be employed under the government's Expanded Public Works Programme and receive a monthly stipend.

"It's clear that these attacks are well orchestrated by criminal syndicates. We as the portfolio committee are proactive in our actions and consulting various security experts and other crime-fighting structures for advice."

The deceased security guards were discovered the following morning by another security guard who was due to relieve them. They were lying in a pool of blood and locked in one of the classrooms.