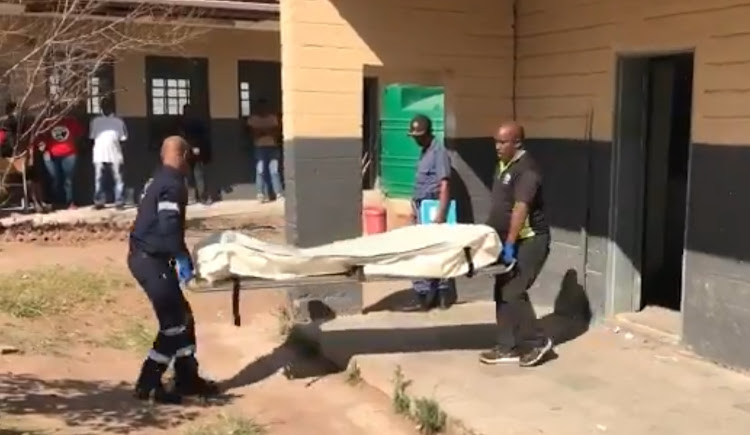 A screen shot from a video showing the body of one of the security guards being carried out of a classroom at Ukusa High School, west of Durban
Image: Twitter/Dasen Thathiah

The principal of a KwaZulu-Natal high school made a shocking discovery on Thursday when he stumbled upon the bodies of two security guards and a critically injured guard at his school.

The bodies are removed from the crime scene. We’re told the attackers may have wanted to gain access to a strong room, but the guards did not have the keys. #UkusaHighSchool pic.twitter.com/h2SbP9Yr4i

He said police received the complaint at 7.30am.

"On arrival at the scene they found two security guards aged 30 and 48 with assault wounds to the head and a crowbar was found next to them. They were both certified dead at the scene," said Zwane.

"It is clear that the intention of the people who killed these security guards was to steal the new equipment. Fortunately they could not go through the store room to steal the equipment."

"It's so unfortunate that they take the lives of other people just so they can get whatever they want from our schools," he said.

Police took in for questioning the husband of a woman who was found dead together with their three children.
News
2 years ago

"Leadership issues" in the eThekwini municipality have "paralysed" interventions by the office of the public protector to improve living conditions ...
News
2 years ago
Next Article