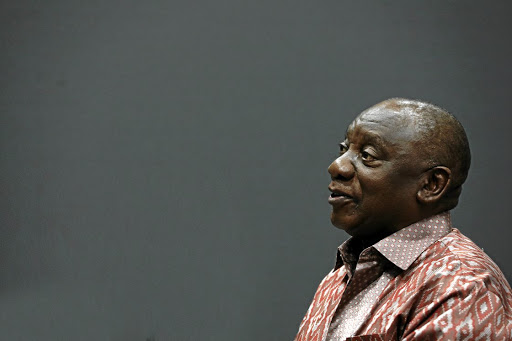 The EFF has called on President Cyril Ramaphosa to take a leave of absence following public protector Busisiwe Mkhwebane's findings against him.

The public protector has already responded to Ramaphosa's Sunday night announcement that he will challenge her report in court‚ with a statement defending the merits of the findings.

EFF national spokesperson Mbuyiseni Ndlozi said Ramaphosa should step back and allow "others with integrity to lead the country".

"He is conflicted and must be on leave until his name is cleared. No sitting president should be in direct conflict with a Chapter 9 constitutional office for things he is guilty of‚" he said.

In her report‚ Mkhwebane found that Ramaphosa deliberately misled the National Assembly when he was asked about a donation made to his ANC election campaign by Bosasa‚ which has been implicated in corruption at the state capture commission.

She also found that Ramaphosa was in breach of the provisions of the Executive Ethics Code and the constitution.

On Sunday evening‚ Ramaphosa said he would seek an urgent judicial review of Mkhwebane's findings against him.

He described them as "flawed".

"The report contains numerous factual inaccuracies of a material nature‚ the findings that are found are wrong in law‚ are irrational and‚ in some instances‚ exceed the scope of the powers of the public protector.

"I have instructed my legal representatives to prepare a legal application to this effect as a matter of urgency. And given the gravity of this matter and appreciating the effect these findings have on the standing and the credibility of both the president and the public protector‚ it is essential that the courts be given an opportunity to review the report and make a finding accordingly‚" he said.

Ndlozi said Ramaphosa had not declared the money to parliament or his principal‚ which was a violation of the law and constitution.

"We call on the NPA‚ parliament and Hawks to implement the remedial action of the public protector on Ramaphosa.

"Placing the report under a court review does not suspend the implementation of the remedial action of the public protector."

President Cyril Ramaphosa said it is “unfortunate” that public protector Busisiwe Mkhwebane did not take his response to her preliminary findings ...
News
2 years ago

Meanwhile‚ Mkhwebane said she is confident her findings are factual and rooted in sound application of the law‚ and has welcomed the president's move to seek recourse through the courts.

"The public protector has the power in terms of the constitution to investigate‚ report on and appropriately remedy any conduct in state affairs or in the public administration‚ in any sphere of government‚ which is alleged or suspected to be improper.

"In addition‚ the public protector has powers under pieces of legislation such as the Public Protector Act (PPA)‚ the Prevention and Combating of Corrupt Activities Act (PACCA) and the Executive Members’ Ethics Act (EMEA)‚ all of which were relied upon during the investigation in question‚" Mkhwebane’s spokesperson‚ Oupa Segalwe‚ said.

Mkhwebane has cautioned political parties and civil society organisations from making statements that may interfere with the office‚ in violation of section 181(4) of the constitution.