'I woke up when he stabbed me': Homeless man describes attack 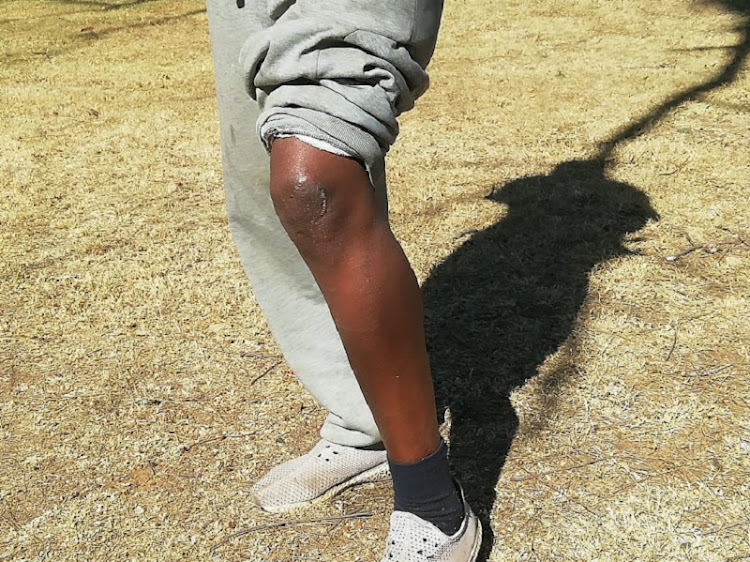 Nqobile Sibanda showing a wound that he says he received last month when a man stabbed him in the middle of the night. Pretoria's homeless are fearing for their lives after five middle-aged men have been killed in a month.
Image: Nomahlubi Jordaan/TimesLIVE

"I'm scared of that man. He stabbed me four times."

These are the words of Nqobile Sibanda‚ a homeless man who says he was attacked in his sleep last month.

He fears that it was at the hands of the same assailant who has gone on a rampage murdering homeless men in Pretoria.

On Wednesday‚ the police confirmed a fifth body was found in Muckleneuk.

"A pathologist is on the investigating team and will confirm the cause and extent of injuries."

Peters said police could confirm that all five victims were "male‚ middle-aged‚ homeless and killed during the night".

Sibanda‚ who was pushing a trolley filled with papers and plastic items he collects to make a living‚ said he does not feel safe anymore. He and other homeless men TimesLIVE spoke to said they now sleep in groups as they are scared of being accosted when they are alone.

When he was attacked‚ Sibanda said he had been sleeping under a tree in the same area where other bodies were found.

"I had left my trolley at the scrapyard and only took my blanket as I was going to sleep.

"The man stabbed while I was sleeping at around 3am. I felt some thing wet in my body and when I woke up‚ he was standing with a big butcher knife.

"He kept stabbing me‚ but I blocked the fourth blow with my knee and he stabbed me on it‚" Sibanda said‚ pointing to the stab wounds he allegedly sustained during the attack.

He has a wound on his knee‚ on his stomach‚ hand‚ arm and knee.

Sibanda said after the attack‚ he cried for help and the alleged assailant fled.

"I cried out and said 'Mama'‚ but that man runs like a ghost. I was waiting to see flames behind him because he ran as fast as a ghost.

"I don't know the person who helped me but they called an ambulance and I was taken to Steve Biko hospital‚" Sibanda said.

Giving a description of his attacker‚ Sibanda said he was short and had a trimmed beard. He was wearing a dark jacket with a hoodie.

"I know I was the first person to be attacked by that man‚" he said.

"Another guy survived but I doubt his hand works now."

"I am scared. I even wish I could go home‚" said the Zimbabwean national.

Asked what he thought was the motive behind the killings of homeless men‚ Sibanda said: "That man has been bewitched".

Another homeless man Thato Bokaba said: "We don't feel safe anymore‚ but what can one do.

"If we don't collect this waste‚ we will end up stealing and we don't want to do that.

Another man‚ who did not want to be identified‚ told TimesLIVE that he slept in the same area where one of the bodies had been found.

A makeshift bed made with cardboard boxes and pieces of cloth could be seen at the spot. The man was taking a nap on the grass close to his sleeping area.

"I'm scared I'm going to die. Even if we sleep in groups‚ I could be killed.

"I'm really really worried. That man is going to finish us."

He said he only heard about the murders on Wednesday morning from other men he lives with in the vicinity.

Christopher Letsoalo‚ a manager at Huckleberry's cafe in Magnolia Dell park‚ which is a stone's throw away from the area where some of the killings have occurred‚ said staff were apprehensive and the attacks were hurting their trade.

"These incidents are quite shocking‚ even my staff members are scared to leave at night.

"People are now skeptical of coming to the park. Even last weekend‚ when it was the long weekend‚ there was not a single function at the park. People normally come here and have their parties and baby showers‚" said Letsoalo.