Alex residents march to Sandton after shutting township down 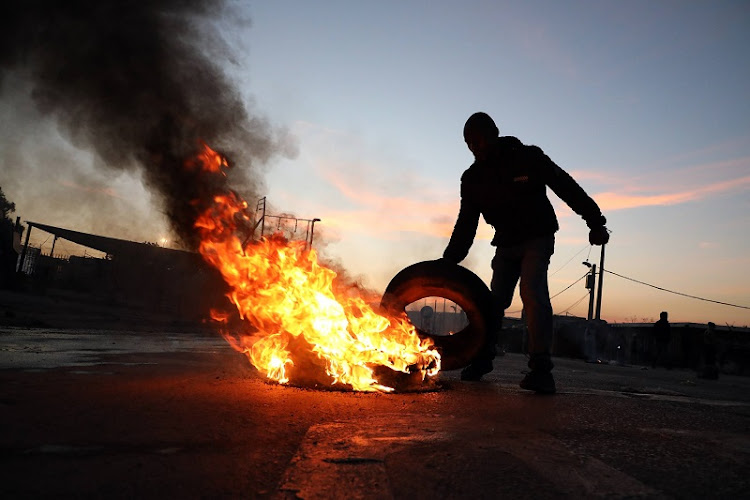 Alexandra residents are once again protesting the slow movement in service delivery in the township.
Image: Sandile Ndlovu

Alexandra residents have begun  their march, and are headed to Sandton.

Earlier, the residents had gathered at the Alexandra stadium and burned tyres on the street as part of the Alexandra total shutdown.

The protest organisers had dragged people trying to go to work out of local taxis, as they tried to shut down the township, much like they did in April. However, unlike the earlier protest, only a few roads were closed as police presence prevented public violence.

The Wednesday shutdown is in protest of government's slow pace in dealing with socio-economic and service delivery problems in Alexandra.

Around 3am, police had already been deployed at various entry points of the township and hot spots. The presence of police momentarily delayed the protesters the usual blocking of the roads as law enforcement kept removing tyres before they could be set alight.

However, three hours later, fewer police were visible on the streets and the protest began in earnest, with demonstrators piling burning tyres and rocks to obstruct roads, particularly the busy Vasco road.

Residents of Alexandra in Johannesburg marched to Sandton on Wednesday, June 19 2019. Residents are demanding that the city of Johannesburg address service delivery issues that include better sanitation and illegal housing in the Alexandra community.

The group of residents who were travelling in a white van, moved from one spot to another, setting up blockages on the road and telling those going to work to return home.

President Cyril Ramaphosa has established an inter-ministerial task team involving all spheres of government when he visited the township in April. The task team has already met to device a plan which will resolve issues such as cleaning the streets within six months.

The task team met towards the end of April and set out short-term action plan that would address the immediate basic service delivery issues within six months.

Alexandra is expected to be shutdown for the second time on Wednesday as residents demand that government’s plans to address service delivery ...
News
3 years ago

Among these were fixing the sewerage running on the streets, an intensive cleaning campaign, address the proliferation of illegal shacks and the high crime rate.

Organisers of the total shutdown told the Sowetan this week that the protests were revived as residents were not happy with the speed at which service delivery problems were being addressed following the president’s announcement.

While the previous total shutdown was able to bring the township to a standstill, the one on Wednesday could not achieve that. Some of the residents were able to leave the township for work.

As organizers moved from one spot to another, residents used the opportunity to leave their homes and head to their places of work. Pupils also emerged from their homes as they headed off to school at sunrise.

The march will go to the City of Johannesburg regional offices in Sandton. Police have maintained a heavy presence since morning.