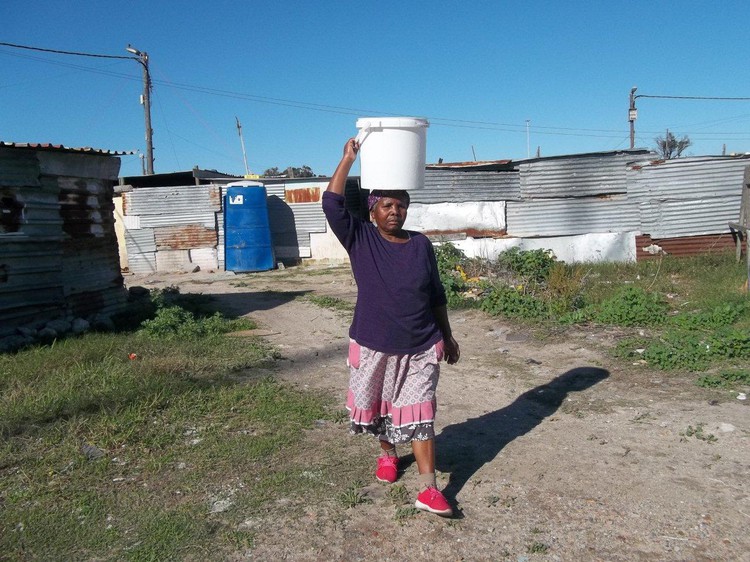 Margaret Mbotshana has received an R18,581 water bill, but has no tap or water supply in her shack and has to carry water herself.
Image: Vincent Lali / GroundUp

The city of Cape Town is seemingly sending water bills to families in shacks, even though they get their water from communal taps and do not pay for water.

Most residents of Mkhonto Square in Nyanga have no water taps on their plots. But they are sent bills which they collect from the local crèche with their other mail, since they have no street addresses.

"We walk from communal taps with buckets of water balanced on our heads as if we live in a rural area," said Maliti. "We can’t pay such huge water bills."

She said: "We want the city to send senior officials to explain to us why we get water bills while residents staying in other informal settlement don’t pay for water."

The city said, however, that it does not send bills to residents of informal settlements and would investigate.

Another community leader, Kholeka Bangani, said about 450 families depended on two communal taps for water in Mkhonto Square. Some tried to avoid queues at the taps by going to nearby hostels to collect water, but were sometimes chased away by hostel dwellers.

Bangani said the two water taps sometimes produced water only in the early hours of the morning.

"Sometimes we wake up at 3am and flock to the two water taps to get water to drink, wash and cook," she said. "While we have a hard time getting water, our water bills keep on shooting up." 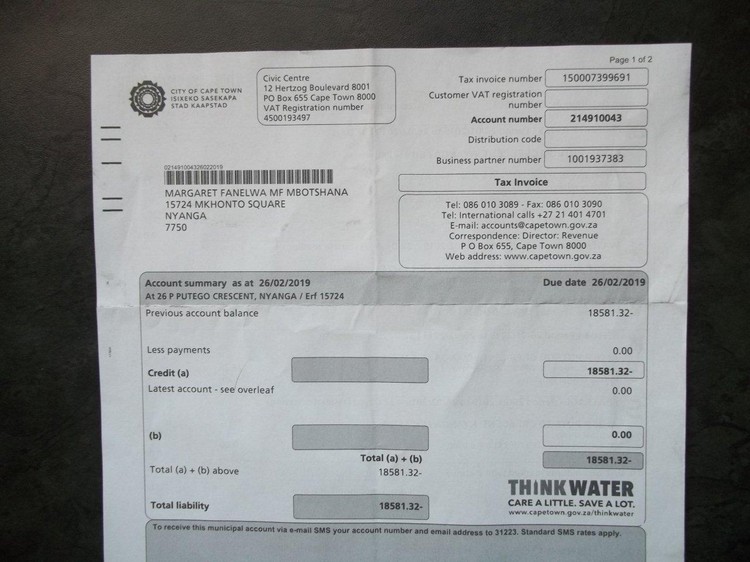 The water bill apparently sent by the City of Cape Town to 70-year-old shackdweller Margaret Mbotshana, despite her not having a tap in her home.
Image: Vincent Lali / GroundUp

Nophelo Hekeni, who lives in a shack with her husband and three children, showed GroundUp a water bill of R153 she received about three months ago. Hekeni said she had bought water pipes and connected them to nearby city water pipes before putting up a tap in her yard.

"I installed the tap so I could get water easily. I now use it along with about 40 families because there is no other tap in my area," she said.

There is no water meter.

Hekeni said she moved into the informal settlement about ten years ago. She makes a living from doing alterations and mending clothes for shack dwellers who have no money to buy new ones.

Nolundi Sangqu, who lives with her husband and four kids, said she had been billed for R2,944 for water. She stores water in two 25 litre containers and uses it to drink, cook and wash clothes.

"I will pay for water only when I have an RDP house," she said.

Seventy-year-old Margaret Mbotshana, who lives with her daughter and three grandchildren, has a bill for R18,581 for water.

"The water bills are piling up at my place. I no longer bother to read them.

"I’m not interested in the letters because I have no water tap in my shack and I collect water from a far-off water tap," she said.

"Residents of informal settlements are not charged for water," she said.

Limberg added: "The city provides a social package that provides water at no cost to approximately 40% of households in Cape Town, which includes the approximately 175,000 informal households."