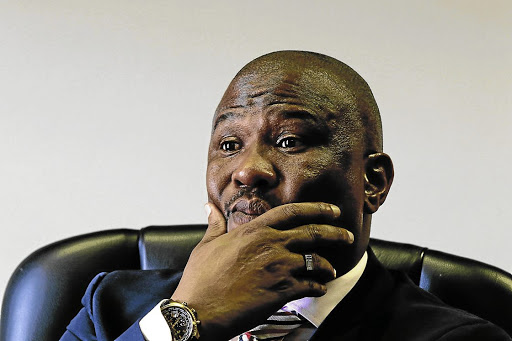 Over R1m siphoned from a municipality in the Eastern Cape was used to renovate the home of ANC provincial chairman and premier designate Oscar Mabuyane.

An invoice of R1.1m was fraudulently generated under the guise that it was for plant hire for a road construction project. However, R450,000 of that money was transferred to a company that renovated Mabuyane's home in the suburb of Bunker's Hill in East London. But the ANC bigwig has denied any wrongdoing. He also questioned why the allegations were surfacing now, almost a year after the transaction.

A probe by Sunday World's sister publication, the Sunday Times, has revealed that the fraudulent invoice was paid to a company linked to ANC Eastern Cape provincial treasurer Babalo Madikizela, who is also the province's MEC for human settlements. The questionable invoice was generated from ANC headquarters in Calata House in April last year.

E-mails and an affidavit seen by the Sunday Times show that the initial invoice to the Mbizana local municipality was created by the provincial manager of the ANC, Mongezi Dyala.

Eastern Cape ANC provincial chairman Oscar Mabuyane on Wednesday promised voters that if the ruling party wins the elections it is going to change ...
News
2 years ago

He claimed, however, that the money was not for plant hire but to assist the municipality after it failed to pay taxi operators that ferried thousands of people to a memorial service organised in memory of the late Winnie Madikizela-Mandela.

Dyala said Madikizela instructed him to invoice the municipality for plant hire instead of transportation. Madikizela declined to comment.

Investigations show that the money was paid by the Mbizana municipality to a company owned by Lonwabo Bam, a businessman friend of Madikizela's, late in July 2018.

At the time of the transaction, Madikizela was provincial treasurer of the ANC. He was appointed human settlements MEC in November.

Mabuyane, who became chairman late in 2017, received R450,000 from the municipality via a company owned by Bam, who invoiced for plant hire even though he had not done the work.

Mabuyane was instrumental in President Cyril Ramaphosa's ANC presidential campaign in 2017. This week the ANC NEC announced that he would become Eastern Cape premier.

The Sunday Times has seen a trail of e-mails between Bam, Dyala and Mbizana municipal manager Luvuyo Mahlaka, which included an invoice from MNT Plant Hire dated 16 April 2018.

On Friday night, Bam admitted the money he paid to the company that renovated Mabuyane's home was siphoned from the municipality by him for work that was never done. "I never did any work for Mbizana worth that much. I was instructed by Madikizela to submit an invoice to the Mbizana municipality claiming R1.1m," Bam said.

Eastern Cape finance MEC Oscar Mabuyane is taking the heat from students after a video of his maiden budget speech surfaced on social media showing ...
News
2 years ago

In a sworn affidavit to police dated April 27, Bam stated that on July 24 2018, he received a call from Madikizela instructing him to invoice the municipality.

"On July 30 2018 at about 15.38pm Madikizela phoned and asked that I forward the invoice to him. Hours after I sent Madikizela the invoice, R1.1m was paid into my account."

He said he was then instructed to pay R450,000 to a company that was renovating Mabuyane's house. Mabuyane previously claimed the money used to renovate his home was a "loan" from Madikizela.

On Saturday Mabuyane vehemently denied all allegations of impropriety.

"I reject with the contempt it deserves any accusations that seek to involve me in wrongdoing. I have got nothing to do with that. This is just blatant malice, this issue of my loan I did last year around July so the question is why it is coming up only now, almost a year later if there was anything wrong? Surely you cannot rule out an underhand and manipulation," the ANC provincial chairman said.

He said he would subject himself to the ANC integrity commission to clear his name.