'I wasn't appointed minister 'cause I pushed for Jacob Zuma's demise," says Lamola 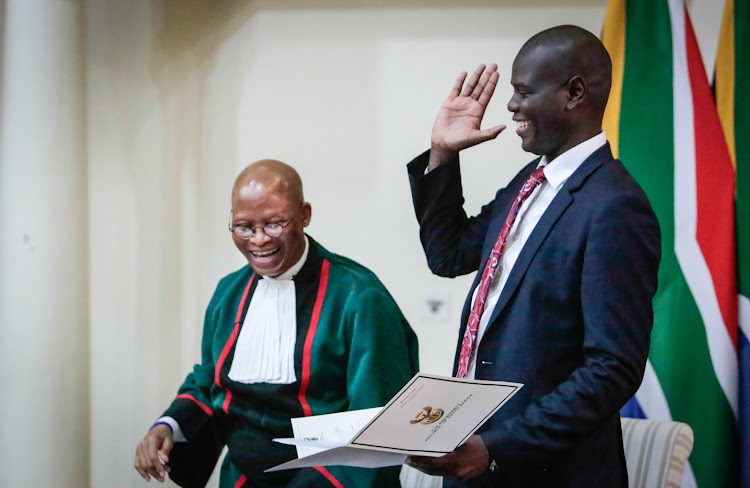 SA’s new cabinet ministers and their deputies for the sixth democratic administration were officially sworn in by Chief Justice Mogoeng Mogoeng today.

President  Cyril Ramaphosa announced his new cabinet on Wednesday night, which saw new faces make the cut into his executive of 28 ministers and 33 deputy ministers.

In  announcing the reconfigured executive at the Sefako Makgatho presidential guesthouse, Ramaphosa said overhauling his administration was a process that’s only just begun.

Those who took their oath of office for the first time in national government, include Senzo Mchunu who has been appointed minister of public service and administration, Ronald Lamola who will head justice and correctional services ministry, and small business development minister Khumbudzo Ntshavheni.

Other new faces include Thoko Didiza who was appointed agriculture, land reform and rural development minister,  Jackson Mthembu who is in the presidency, and  environment, forestry and fisheries  minister Barbara Creecy.

The new cabinet was a mix of faces and a few surprises.
News
2 years ago

Good leader Patricia de Lille made a surprise entry into the new cabinet, where she’s the only minister who comes from the opposition benches. She will head the ministry of public works and infrastructure.

In his address during the cabinet announcement, Ramaphosa said a reconfigured executive was an ideal “but we also see it as a process... that should finally lead us to the blueprint of the government we all seek. So, we are on a journey and the journey will finally end at a destination that will give us all the best government that we want.”

Speaking to reporters after being sworn in, Lamola said he wanted to transform the legal system.

“The legal system must be transformed. I would want to see many young professionals coming through. Our country has diverse cultures and people, but have to restore the prestige of the department,” said Lamola.

He added that  his appointment was as a result of his activism in the youth structures of the ANC and his 10-year experience in the legal field.

Lamola dismissed claims that he was “rewarded” the position for standing up against Jacob Zuma, after he spearheaded marches to ANC headquarters Luthuli House calling for the former president to step down.

She was responding to a question about sitting on the opposition benches but co-governing with the governing party, which will ultimately, make her less effective.

De Lille said she would serve the people of SA with her utmost honesty.

Meanwhile, Didiza said she was humbled by being appointed in the new cabinet.

“I’m honoured that the president has given me the responsibility to be the minister of agriculture, land reform and rural development in the sixth [democratic] administration,” she said.

Ramaphosa merged a number of ministries which include: trade and industry with economic development, higher education and training with science and technology, environmental affairs with forestry and fisheries, agriculture with land reform and rural development, mineral resources with energy, and human settlements with water and sanitation.