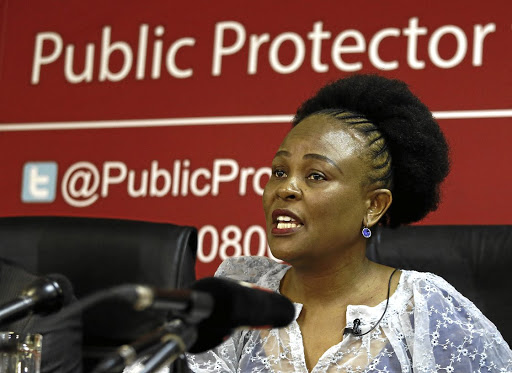 Mkhwebane's office confirmed to Sowetan yesterday that she was scheduled to have a sit down with Zwane who was at the helm of the department which implemented the project that saw the Free State government allegedly wasting more than R100m.

Mkhwebane is under fire after her report on the failed project, which made no findings on former Free State premier Ace Magashule and Zwane, was set aside and found to be invalid, irrational and unconstitutional by the North Gauteng High Court this week in a scathing judgment by judge Ronel Tolmay.

Magashule, the ANC's secretary-general, was the Free State premier when the project aimed at benefiting small-scale black farmers was rolled out.

Mkhwebane's acting spokesperson Oupa Segalwe said the public protector had already interviewed Magashule on the matter following last year's request by parliament's portfolio committee on justice that she looks into the role of politicians in the scandal which allegedly benefited Gupta-linked companies.

"The interview with Mr Zwane and others is still on the cards... the committee also asked that the public protector look into the plight of the beneficiaries," Segalwe said.

"She met with them [beneficiaries] last month in Vrede during a public hearing on the matter."

Court says it was ‘irrational’ of the public protector not to take into consideration evidence in the public domain implicating high-ranking public ...
News
2 years ago

Segalwe said Mkhwebane was still considering her options, which included approaching the Constitutional Court directly, as she appeals the judgment.

"That she will appeal is not in doubt... the question before her is whether to apply for leave to appeal in the Supreme Court of Appeal or [go] for direct access to the Constitutional Court," Segalwe said.

Mkhwebane had also expressed concern, among others, that in setting aside the entire report, the judgment might be interpreted as though the court condoned the maladministration attributed to the parties against whom adverse findings were made.

UCT law professor Cathleen Powell said: "It is a preposterous claim that anybody who has read the case could think that the court condones the maladministration of the Estina project."

Powell said it was clear from the judgment that the court finds the level of corruption around the project, and particularly its abuse of the poor and vulnerable, to be unconscionable.

"Furthermore, it is notable that adverse findings were not, in fact, made against any individuals in the public protector's report. There is a general finding against the department's system of management and administration," Powell said.

"Instead, she leaves it to the two people, themselves implicated in the evidence before her [namely, the head of department and the premier] to identify who the implicated parties really are and discipline them."

Beneficiary Meshack Ncongwane said they have made sworn statements to Mkhwebane and they were hopeful that the investigation would uncover the gross corruption which left them destitute.

One of the "benefactors" of the controversial Estina dairy farm at Vrede has told public protector Busisiwe Mkhwebane that the project raised ...
News
2 years ago

The National Prosecuting Authority (NPA) is provisionally dropping its case against Gupta family members and business associates implicated in the ...
News
2 years ago
Next Article