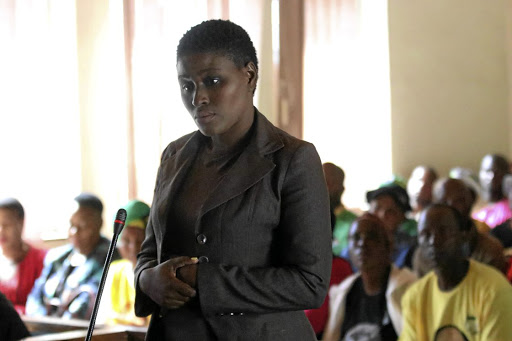 The lawyer representing popular Thobela FM gospel presenter Raesetja Faith Choshi is adamant that the case against his client would be withdrawn.

Advocate Mphafolane Koma said on Wednesday there was no case against his client. Koma was speaking shortly after Choshi appeared alongside her co-accused Peter Mongadi and Mabetha Mapoulo in the Seshego regional court.

Mongadi, 42, and Mapoulo, 44, are facing charges of attempted murder and kidnapping. This relates to an incident on November 3 2016, where Mashabela, who had an affair with Choshi, was kidnapped from his house in Kwena Moloto village near Seshego. He was tied with cable ties and allegedly assaulted before being bundled into the boot of his car, which was driven by three men in the direction of Lebowakgomo.

The men stopped next to the Chuene Dam where they doused the car with petrol before setting it alight, with Mashabela inside. He miraculously escaped after kicking the door open, albeit with severe injuries on his head and hands. Choshi was arrested after police investigations allegedly linked her to the plot. It was also alleged that one of the men, Mongadi, who is also a pastor in Tembisa, Ekurhuleni, was her boyfriend.

The Limpopo radio personality accused of conspiring to murder her ex-boyfriend has been granted bail.
News
3 years ago

The two men were arrested weeks after the gruesome incident but later released on warning. Koma said on Wednesday that he had made an application to the court in terms of section 342(A) of the Criminal Procedure Act 51 of 1997 to have the case withdrawn. The matter was postponed to June 24 to allow the state to come up with evidence linking his client to the case.

“Should the state fail to proceed with the case on June 24, I'm going to apply for a permanent withdrawal of the matter,” said Koma, adding that the state had been given the last chance to come up with evidence linking his client to the charges.

“There's no new evidence. The state's case is weak. I cannot continue to present arguments whereas the state does not come up with new evidence on the matter,” he said.

During the previous postponement, the state said it was waiting for the third accused, Choshi, to join her two co-accused. Now the state is waiting for a directive from the national director of public prosecutions (NDPP) on how to proceed with the matter.

The state had requested to be given a month to get a directive from the NDPP, hence the postponement.