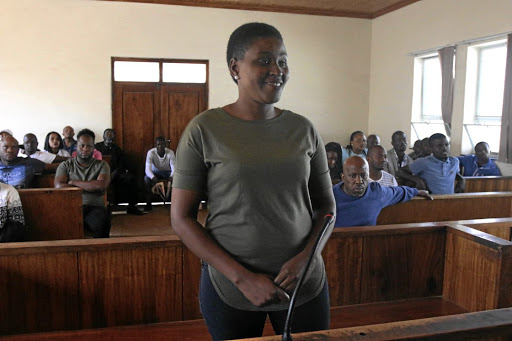 Thobela FM's presenter Raesetja Choshi in the Seshego magistrate's court were she faces a conspiracy to the murder charge. /ANTONIO MUCHAVE

The Limpopo radio personality accused of conspiring to murder her ex-boyfriend has been granted bail.

She was arrested on Monday after police ordered her to turn herself in.

Choshi, 36, was being investigated on accusations that she had conspired to murder her former boyfriend, Steve Mashabela, who is an ANC councillor in the Polokwane municipality.

The incident allegedly happened on November 3 2016 when three men entered Mashabela's house in Kwena Moloto village near Seshego and found him in the company of Choshi.

The men allegedly assaulted Mashabela before bundling him into the boot of his car after tying him up with cable ties.

They drove in the direction of Lebowakgomo until they stopped next to the Chuene Dam, where they allegedly doused the car with petrol before setting it alight, with Mashabela inside.

He miraculously escaped by kicking open the door.

Following intensive police investigations, Choshi was arrested after being linked to the matter.

During her court appearance yesterday, the state indicated that it will not oppose to bail.

Her lawyer, Advocate Mphafolane Koma, told the court his client intended to plead not guilty to the charges.

Magistrate Michael Mamabolo said the court took into consideration the fact that the state was not opposing bail and that investigations into the matter had been completed.

"The court is of the view that the accused person will in no way interfere with the police investigations, hence she is a suitable candidate for release on bail," said Mamabolo.

The case was postponed to to the Seshego regional court on Wednesday when Choshi will appear alongside co-accused, Peter Mongadi and Mabetha Mapoulo, who were arrested earlier and released on a warning.

Mamabolo further warned Choshi that she was facing a schedule 6 offence.

When presenting an affidavit on behalf of his client, Koma indicated that Mashabela had assaulted her.