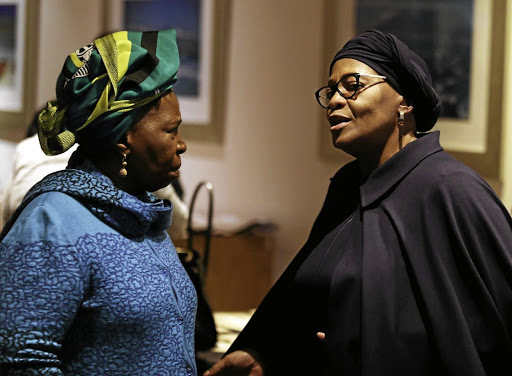 The ANC Women's League lost their fight to have a female premier in North West, but won big in parliament yesterday, as all key ANC positions in the National Assembly are going to women.

The NEC agreed on Thandi Modise as the speaker of National Assembly, replacing Baleka Mbete, while Eastern Cape MEC for public works Pemmy Majodina will get installed as chief whip - a position previously held by Jackson Mthembu - and deputised by Doris Dlakude who held the same position in the previous administration.

Environmental affairs minister Nomvula Mokonyane would now be chair of chairs, moving from cabinet to a position previously held by Cedric Frolick.

The women's league had demanded a 50-50 gender parity split on premiers, but managed to win only two provinces after the ANC announced yesterday that Job Mokgoro would retain his position as the premier of North West.

"We will try and convince everybody to agree with our position, but you know ultimately it's about the majority vote," said ANC secretary-general Ace Magashule in Cape Town yesterday.

Speaking on Majodina, Magashule said she is well experienced in governance issues.

All the members of parliament and those of the nine provincial legislatures were not forced upon us, we chose them on May 8.
Opinion
2 years ago

'Only two female premiers a 'step backwards' for ANC'

It is a “disappointment” and “clearly a step backwards” that the ANC disregarded its own internal policy in appointing five male and only two female ...
News
3 years ago

"She comes from the Eastern Cape, she is part of that generation of young people. She has been with the youth league and we considered her a generational mix," he said.

"We unanimously adopted this list as the NEC, no issues and Thandi Modise will be the speaker of the National Assembly and will still ensure continuity by bringing deputy speaker Lechesa (Tsenoli)."

The women's league had not responded to questions from Sowetan at the time of going to print.

Some of the positions announced by the NEC include that of Amos Masondo as the chairperson of the national council of provinces (NCOP) who will be deputised by former Northern Cape premier Sylvia Lucas, while Seiso Joel Mohai will be installed as the chief whip and chair of caucus.

Sources close to the process said former chief whip Mthembu is heading to cabinet as minister of communication, while Nkosazana Dlamini-Zuma is tipped to return to a position she held under former president Thabo Mbeki as international relations minister.

Lindiwe Sisulu is tipped to be moved to home affairs while Mmamoloko Kubayi-Ngubane is set to become minister of basic education.

Naledi Pandor is expected to retain her position as higher education minister.

Tito Mboweni is also likely to retain his position as the finance minister but would be deputised by David Masondo, replacing Mondli Gungubele.

Meanwhile, Thoko Didiza may go to her previous position as agriculture and land minister which she held under Mbeki.

Sowetan understands that Ramaphosa's cabinet will only consist of 26 ministries and nine deputies on essential services only.