'No place for complacency in the EFF' 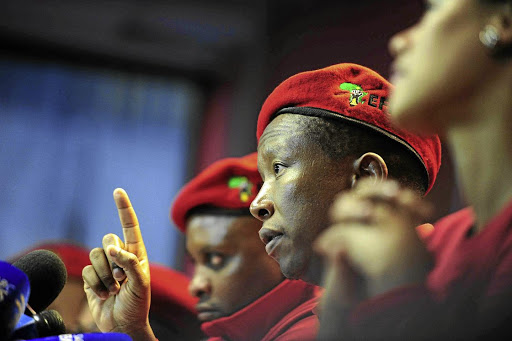 EFF president Julius Malema says people become wheelbarrows when they are deployed as you will find them where you left them.
Image: Thulani Mbele

EFF leader Julius Malema has warned his party members who did not campaign during the elections that they will be dealt with.

Although the EFF showed significant growth nationally and in the majority of provinces, the red berets leader said the party would replace incompetent councillors and party leaders who didn't toe the party line heading into the elections.

"You have to invest in the organisation, because there is a general laziness and incapacity to think outside the box. People become wheelbarrows when they are deployed. If you leave them there, you will find them where you left them. There is nothing that happens through a miracle."

Out of the 48 parties on the national ballot paper, the EFF, Freedom Front Plus and IFP saw the most growth overall.

Malema cherishes vote of confidence in the EFF

Following the party's good showing across all provinces in the country during the elections, EFF leader Julius Malema says the party’s strides show ...
News
2 years ago

At provincial level, the EFF is now the official opposition to the ANC in Limpopo, Mpumalanga and the North West, replacing the DA.

Malema, however, said self-introspection was important so that challenges can be identified in the run-up to the recent elections, including those who refused to work the ground.

"There might be 90% replacement of MPs and we make no apology about it, as long as they do not perform. We don't see that as a weakness, we replaced MPs on the fifth parliament and it never affected our performance."

Malema said if internal report findings show that he did not perform well, he is willing to step down. "Yes I failed. The EFF can remove me if they want, I don't have a problem. Anytime you can remove me. I was deployed in three provinces and we did not do well. If the problem is that the president [Malema] was not helpful, let it be that conclusion."

Although he acknowledged the party's failure in some provinces, he said the party did not lose a vote.

The ANC, the EFF and the DA have been at loggerheads in the capital city, after failed motions of no confidence against former mayor Solly Msimanga.

Malema assured current mayor Stevens Mokgalapa of the DA, that the red berets would not be calling for a motion of no confidence but would like to take over in a manner that is not chaotic.

EFF leader Julius Malema said on Thursday that his party was in negotiations with the DA to formally partner in governing Tshwane and Johannesburg.
News
2 years ago

EFF leader Julius Malema has demanded that President Cyril Ramaphosa reduce his cabinet drastically or else there will be consequences.
News
2 years ago
Next Article