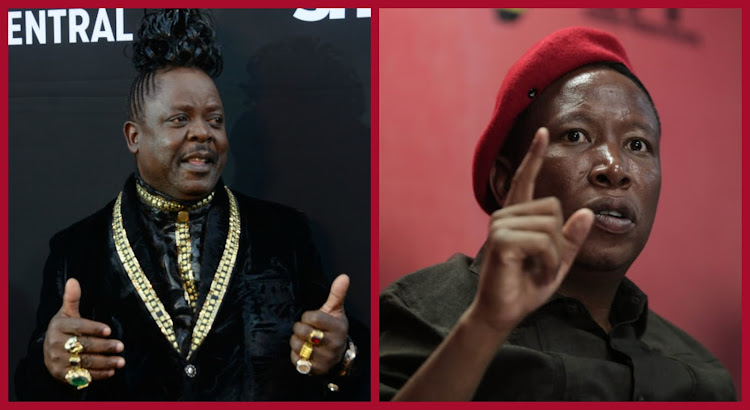 EFF leader Julius Malema has addressed the "beef" between himself and Papa Penny, calling the musician a cry baby and explaining that, while he loves the star, he should understand it is election season, when politicians "pick on each other".

A fuming Papa Penny took to social media this week after Julius allegedly mocked the reality star's "lack of education" during one of his rallies.

Julius replied with a brief statement and laughing emojis, but as the video went viral he apparently inboxed Papa Penny to try to fix the situation. Papa Penny told TshisaLIVE that he wanted a public apology from Julius.

While TshisaLIVE's attempts to contact the EFF for comment were unsuccessful, Julius told Jozi FM on Friday that Papa Penny was "deflecting".

He claimed that he had made the comments about Papa Penny in relation to allegations about a businessman having politicians in his pocket.

"Papa Penny is deflecting. He is putting more emphasis on me saying 'this one who is not uneducated'."

When asked why he would refer to Papa Penny as uneducated, Julius claimed that Papa Penny had always referred to himself that way. He added that it was election season, when politicians pick on each other.

"No, it is an election time. We pick on each other. Papa Penny is a politician. Now he is a cry baby and says all these things, but doesn't deal with the point I am making".

Julius said he messaged Papa Penny to try to sort out their differences and explain himself, but there was no resolution.