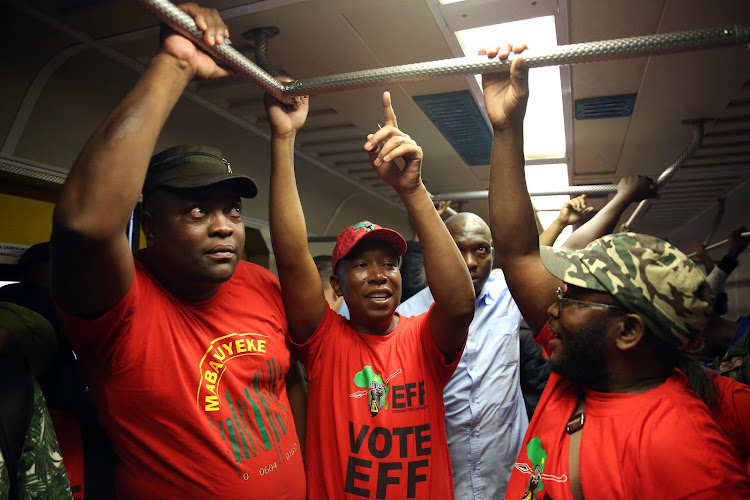 EFF leader Julius Malema described his first-ever experience on a Metro Rail train as an "experience and a half” while on the campaign trail in KwaZulu-Natal on Tuesday.

Malema joined thousands of commuters just after 6am on their way to work from Umlazi to the Durban city centre.

PODCAST: The Numbers Don't Lie - Is the IFP coming back?

"I was last on a train on my way to Cape Town to the ANC conference while I was still in the Youth League, but it was just us on it, it was not an ordinary train with ordinary citizens so this is an experience and a half for me," said Malema.

The nearly 45-minute train ride saw scores of commuters taking selfies with Malema and telling him about their day-to-day travel woes, while EFF supporters chanted struggle songs the whole way.

"Our people are subjected to overcrowded trains and as a result they are arriving very late to work and school. Those are the issues we need to fix," he said.

With less than three weeks to go until the national elections, Malema has been on the campaign trail in KwaZulu-Natal.

He is expected to address students at the Durban University of Technology later on Tuesday.

On Monday Malema and former president Jacob Zuma were both in northern KZN on the campaign trail for their respective parties.

ANC president Cyril Ramaphosa has responded to EFF leader Julius Malema's claims that he would lose the ANC internal battle during the party's ...
News
3 years ago

An assault case against EFF MP Marshall Dlamini was postponed until June 5 in the Cape Town magistrate’s court on Tuesday.
News
3 years ago
Next Article