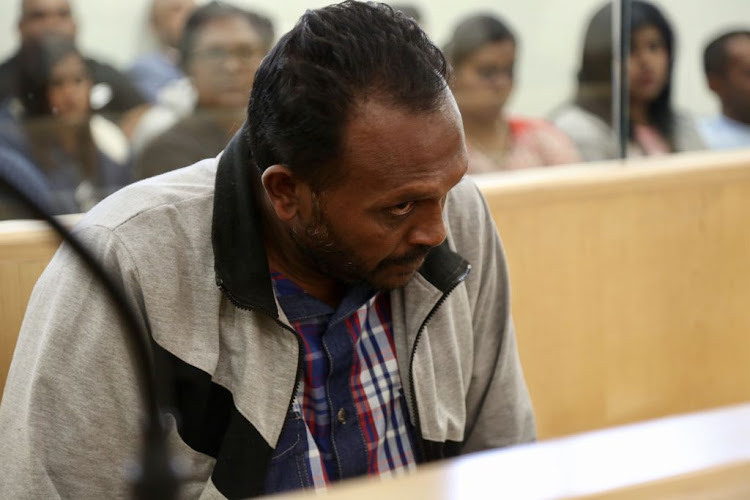 Collin Pillay made a brief appearance in the Verulam Magistrate's Court on Wednesday. The indictment alleges Pillay first killed two girls and then their mother when she returned home.
Image: Jackie Clausen

An extramarital affair is behind the killing of a Phoenix mother and her two daughters at their home in 2018, according to an indictment lodged by the state.

Collin Pillay, 45, stands accused of murdering Jane Govindsamy and her two daughters‚ Rackelle‚ 16‚ and Denisha‚ 22‚ in their Phoenix flat on September 21.

Pillay made a brief appearance in the Verulam Magistrate's Court on Wednesday where he was indicted on three counts of murder and theft.

According to court documents, on the morning of the murders Pillay suspected that Jane was involved in another extramarital relationship outside of the one she was having with him.

At the time of her death Jane was living in the house with her husband, Sagren. The Sunday Times reported that Pillay had a longstanding relationship with Jane‚ which Sagren Govindsamy has strongly denied.

The indictment tells chilling details of how Pillay first killed Rackelle and Denisha, hid their bodies and waited for Jane to return home.

A nine-day trial is expected to begin at the Durban High Court in July.

From the gruesome murders of entire families to the tragic death of a young girl in a botched hijacking, here are seven murder cases to watch in 2019.
News
2 years ago

Mohammed Ebrahim — accused of the abduction and murder of nine-year-old Miguel Louw — is highly intelligent‚ devious and brazen.
News
2 years ago
Next Article