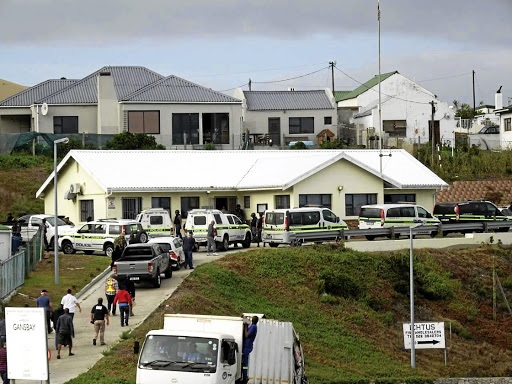 Police and Hawks swoop on the department of agriculture, forestry and fisheries building in Gansbaai during a raid where government officials were arrested last year.
Image: Supplied

One of the suspects allegedly involved in a massive poaching syndicate with nine department of agriculture‚ forestry and fisheries (DAFF) anti-poaching officials was shot dead on Monday.

Donovan Williams‚ an alleged member of the 28s gang and an alleged abalone poacher‚ was killed in an industrial area in Gansbaai‚ several sources told TimesLIVE.

Williams was expected to appear in the Cape Town High Court on April 26‚ when the case against him and 18 other individuals linked to a massive abalone poaching ring will be heard.

Poached abalone worth nearly R5m was seized in a police raid in the Cape Town suburb of Milnerton on Friday.
News
3 years ago

He was due to face charges of racketeering‚ corruption and defeating the ends of justice.

In March 2018‚ Williams was arrested with nine DAFF officials who are alleged to have turned the anti-poaching unit's office in Gansbaai into a criminal enterprise.

He and most of the other accused were out on bail pending their trial. This is despite transcripts of recordings being presented to the regional court in Cape Town in which some of the accused allegedly discussed acquiring firearms to kill some of their fellow suspects.

The nine officials who allegedly formed their own abalone poaching syndicate were back in their jobs a week after being released on bail of R20‚000 each.