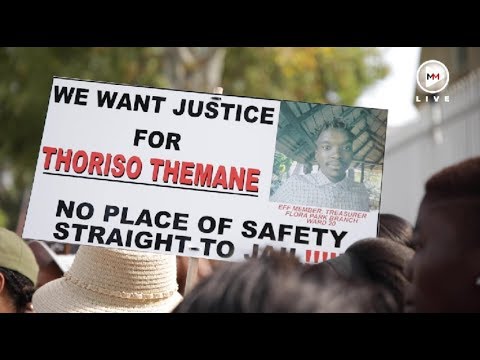 Community members gathered outside the Polokwane Magistrate’s Court on February 28 2019 to demand justice for slain Thoriso Themane. One of the pupils who is accused of his murder has claimed self defence in another case where a fellow was attacked.

The teen - who cannot be named as he is a minor - appeared in court on Wednesday on an attempted murder charge linked to the stabbing.

He is due to appear again on Friday in relation to Themane's murder.

NPA spokesperson Mashudu Malabi-Dzhangi said his case was postponed to April 8 to allow Limpopo’s director of public prosecution to make a decision on whether to prosecute.

The teen was initially charged with assault with intent to cause grievous bodily harm.

"He testified in court that it was self-defence‚" said Malabi-Dzhangi.

The three men accused of the murder of Thorisho Themane, 28, could not have been involved in the killing as one of them alerted police to the crime.
News
3 years ago

The teen’s attempted murder charge emanates from an incident in December 2018‚ when he apparently stabbed 19-year-old Vincent Thomas at a party.

In the Themane matter‚ the same pupil was seen in a video - shared widely after the murder - saying he felt good that he had killed a person. He was wearing his school uniform in the video.

The pupil's dad is a former cop. "Yes‚ you know my father is untouchable‚" he boasted in the video‚ before walking away.

Meanwhile‚ a seventh suspect implicated in Themane’s murder has denied any involvement in the killing. “The new accused [accused number seven] will join the others [in court] on March 22. He did not acknowledge the responsibility‚” said Malabi-Dzhangi.