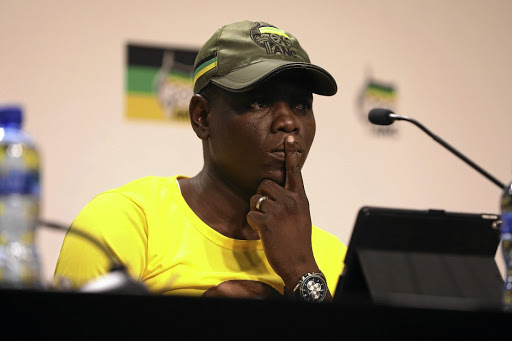 Ronald Lamola shies away from expressing his views on controversial party members who found themselves on the ANC list to parliament.
Image: Thulani Mbele

ANC member of the national executive committee (NEC) Ronald Lamola has defended the list of people nominated for parliament after the general elections in May.

The list, which has come under scrutiny for not having enough fresh blood, boasts a lot of old faces who have had their fair share of controversy.

Names that have sparked public outcry include those of environmental affairs minister Nomvula Mokonyane, former home affairs minister Malusi Gigaba and minister of women in the presidency Bathabile Dlamini, among others.

Gigaba, whose possible close links to the controversial Gupta brothers, was a subject of a parliamentary committee on home affairs report released yesterday. The report found that the early naturalisation of Ajay Gupta's mother and wife was illegal as only his two children met requirements.

In an interview with Sowetan yesterday, Lamola said although not completely satisfied with the number of young people on the list, the agreed target was to have at least 20% of young blood, which has been achieved.

"For me, I feel that I represent a generation and it's a generational triumph for us that at least we have been included and we have got a responsibility and that is why I accepted," said Lamola, adding there are a lot of young people on the list for deployment to National Assembly.

ANC a bunch of rogues hiding behind the mask of Ramaphosa

Lamola said even though there could have been more young people, there was still progress. "The NEC had a duty to bring 20% of young people into [the] list which it has done."

He explained that the ruling party's list represented the wishes of the ANC structures.

If perhaps he held a different view, Lamola kept it to himself as he seemed guarded and self-restrictive.

When asked for his view on some of the people others feel shouldn't be on the list, Lamola responded: "I think your question is also unfair, I can't really judge on other people [who] I'm with on the list, it's for the SG [secretary-general] to engage on some of the issues; but from our perspective, the list is an outcome of our democratic processes.

"With regards to many other members, I think it's a reflection of the will of the structures of the ANC - who must come in, who must come out - and I can attest to you that I think the list is well balanced."

He said the list reflected "unity and cohesion" that many in the ANC always wanted to see.

"There is no one at this stage who is still opposed to President [Cyril] Ramaphosa.

"He is the president of the ANC and everyone is rallying behind him.

Pule Mabe and head of presidency Zizi Kodwa remain on the party's election list to parliament.
News
2 years ago
Next Article