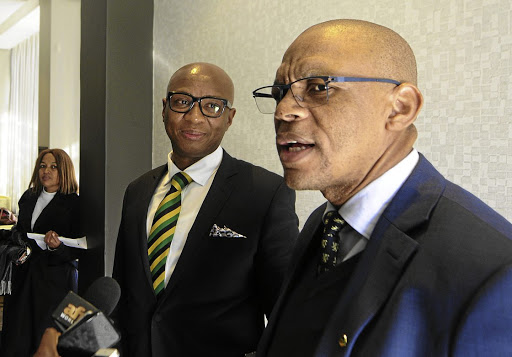 Zizi Kodwa and Pule Mabe have made the ANC's election candidate list despite the pair having stepped aside due to pressure from sexual allegations hovering over their heads.
Image: Thulani Mbele

The pair, who are members of the ANC's national executive committee, stepped aside from their positions last month due to pressure amid these allegations.

However, Sowetan has now learnt that both Mabe and Kodwa's names will be among those submitted to the Independent Electoral Commission (IEC) next week, if there are no objections lodged.

The IEC has given political parties until March 13 to submit finalised lists of their candidates.

ANC acting spokesperson Dakota Legoete told Sowetan that Mabe and Kodwa were yet to be found guilty by a court of law, and therefore, they wouldn't be excluded on the basis of allegations that have not been tested.

Embattled ANC deputy chairperson in KwaZulu-Natal Mike Mabuyakhulu has removed his name from the list of candidates vying for positions in parliament ...
News
3 years ago

"For now, on matters of the ANC's integrity, I have limitation to talk on them because anybody who has question marks [tainted] must be referred to the integrity commission," said Legoete.

He said the integrity commission would be reporting to the ANC's top six officials on Monday.

"For now, Kodwa and Mabe have not been officially charged by our law enforcement agencies. If you and I join the dots when matters are like this, how do [we] make a decision to punish them?," said Legoete.

Integrity commission chair George Mashamba said he was yet to see the list and, therefore, it would be premature for him to comment.

"The integrity commission has not seen the list and it has not been requested by the ANC to comment on it, so I don't know who is or is not on the list ," said Mashamba.

Mabe was accused of sexual harassment by his personal assistant Kgoerano Kekana late last year and was cleared by the party's grievance panel last month.

Kodwa was accused of raping a woman at a private function in April last year.

He has denied the allegations and said he refused to "succumb to extortion and blackmail" and would not be silenced through "dirty tricks".

Former president Jacob Zuma is going to decline the nomination that would have seen him go back to parliament after the May elections.
News
3 years ago

'Ulo' in top 50 of ANC national list.
News
3 years ago
Next Article