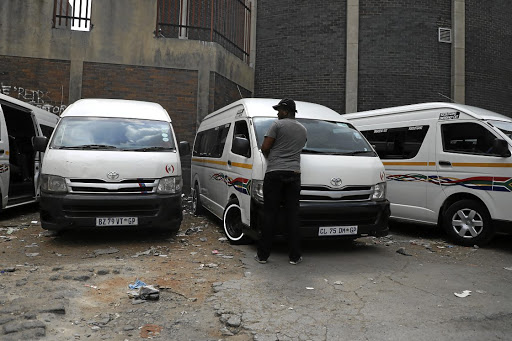 Soweto taxis are grounded after Gauteng transport MEC Ismail Vadi ordered a shutdown of some taxi ranks and routes due to violence between two associations in the area.
Image: Thulani Mbele

While Gauteng transport MEC Ismail Vadi makes up his mind on whether closed taxi routes should operate, commuters and businesses are feeling the pinch of not having public transport in Soweto.

Along Mahalefele Road in Soweto, which runs in Orlando West, Dube and Phefeni, there was no sight of a taxis yesterday, the fourth day of the closure of ranks and routes belonging to Witwatersrand African Taxi Owners Association (Wata) and Nancefield Dube West Taxi Association (Nanduwe).

Aaron Mashiqe, who lives in Phefeni but works in Rockville, said he was exhausted from walking to work as there were no taxis.

"My feet are aching. I have to walk for one-and-a-half hour because there are no taxis. I walked to and from work. It has only been a few days [but] it is already bad. I don't know how my feet will be feeling by June," Mashiqe said.

Another commuter, who has had to walk long distances to get to work, is Fundi Nene who works at the flower shop.

"I have to walk for 30 minutes to come to work here because there are no taxis. I am also forced to close the shop earlier than usual to compensate for the time I'm going to spend on the road walking back home to Orlando East," Nene said.

Police have impounded 15 vehicles that were found operating in the routes and ranks closed by Gauteng transport MEC Ismail Vadi in ...
News
3 years ago

She added that the shutdown of taxi operations had an negative impact on her work.

"People here use taxis to travel around. Now that taxis are not around, there is less people coming through the door to buy flowers.

"They really have to find a solution for this taxis issue," said Nene.

Her neighbour, Lerato Maseko, who sells hair products had the same gripe.

"It is really difficult since the taxis are not around. Business is very low. There is less customers walking into the shop. I don't think I will cope if things continue like this," she said.

Last week, Vadi announced the three-month closure of taxi ranks and routes belonging to Wata and Nanduwe due to violence between the two associations.

Wata and Nanduwe have already signed an agreement committing themselves into ending the violence.

Their agreement is currently before the MEC who has to make the decision if it is convincing enough to reopen the affected taxi operations.

Vadi's spokesperson Melitah Madiba said the MEC had "noted" the agreement and also received further representations from the associations which he was considering.