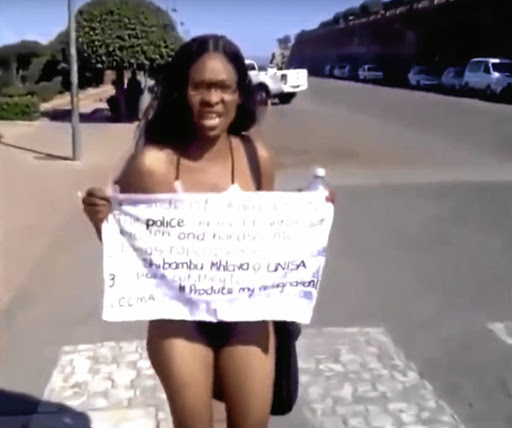 Gugu Ncube outside The Union Buildings during her protest.

Gugu Ncube, the woman who was arrested for staging a nude protest outside the Union buildings in Pretoria, has been traumatised by the way police handled her.

This is according to Ncube's lawyer, Mpho Nefuri, who spoke to Sowetan after her client appeared before the Pretoria magistrates' court on a charge of public indecency, yesterday.

"She is very traumatised. She has had people manhandling her and harassing her with threatening messages," Nefuri said.

Videos of Ncube being dragged and carried into a police van by a group of female police officers went viral on social media, with people questioning the fairness of her arrest. Ncube's case was postponed to April 10.

She was arrested while standing outside the Union Buildings in her underwear, demanding President Cyril Ramaphosa's intervention after Unisa management allegedly ill-treated her for laying a sexual harassment complaint against her boss.

She alleged she was asked to perform sexual favours in exchange for keeping her job.

Nefuri criticised the manner in which the arrest was handled and said Ncube might have to consider suing the state.

A video of a half-naked woman being arrested at the Union Buildings in Pretoria has made the rounds on social media. Gugulethu Ncube was protesting on Wednesday March 13 2019 against alleged harassment by her former manager at the University of South Africa (Unisa) when she was arrested for public indecency.

A woman has been arrested after staging a semi-nude protest at the Union Buildings in Pretoria today.
News
2 years ago

"The whole Sunnyside police station was there to arrest one woman who was not even armed with a stone to defend herself," she said.

Nefuri said there were no grounds to charge Ncube with public indecency, saying she believed they had a strong case.

"I believe she has done nothing wrong," Nefuri said.

Yesterday, police spokesperson Colonel Lungelo Dlamini said he could not comment on Ncube's arrest as the case was with the courts. Dlamini said Ncube could lay her complaint before the magistrate if she felt aggrieved.

Unisa vice-chancellor, Professor Mandla Makhanya, released a statement denying that Ncube had been employed by the university saying that she was bringing the institution into disrepute.

Makhanya said Ncube was a former employee of a company called Unisa Centre for Early Childhood Education that was previously sponsored by Unisa. He said some Unisa employees were suspended after Ncube laid a complaint of sexual harassment in 2018.

"We appeal to her to desist from her actions; the name of the university should not be dragged into this matter as it is solely between her and UCECE," Makhanya said.