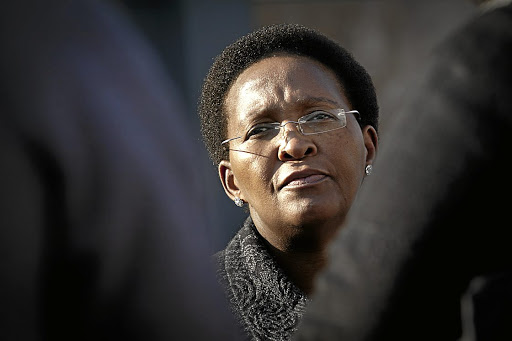 Gauteng sport, arts and culture MEC Faith Mazibuko has a chequered history of outbursts that have landed her in trouble.

The controversial MEC, whose fate now hangs in the balance after her latest flare-up with senior management in her department, had to apologise to the public after her audio went viral.

In the audio taken during a management meeting, Mazibuko could be heard yelling at senior managers, saying she wanted a project for "combi courts" completed as she wanted to use it to campaign for elections.

A member of her staff tried in vain to tell her that they could not find a "legal mechanism" and that "there is not a valid contract in place" to roll out the project but Mazibuko would have none of it.

"Lalelani la (listen here) you two... I want those combi courts... how you do that, if it meant you go construct them with your hands, you better do it.

"I want those combi courts, no rollover of that money of combi courts you two," she screams while seemingly tapping the table.

"I . profusely apologise to the people of Gauteng . After deep personal reflections, I want to unreservedly apologise for the tone and improper language I used towards my head of department [HOD] and chief financial officer [CFO]," she said.

But this was not the first time the MEC had made reckless statements that have got her into trouble.

In 2014, her office had to pay an out-of-court settlement of R350,000 for telling a mother of newborn triplets to "close up" her legs.

The mother had asked the MEC about how to access social grants.

In a separate incident recorded in a video that emerged in 2015, Mazibuko was caught in a brawl with an unknown man which almost turned physical.

It is not clear what the argument was about but the MEC could be seen in a video clip being held back from assaulting the man who she had backed into a corner.

She could be heard saying "Now you're talking nonsense" while continuously wagging her finger at him.

"We want, once more, to apologise to the white and the Indian community and say that the ANC is a nonsexist, nonracial organisation. We will submit comrade Faith before the integrity committee for due processing in the ANC," Khawe said.

The ANC Women's League in the province, however, appeared to back the embattled MEC.

The league said it accepted her apology unreservedly but urged officials in government to try their best in ensuring service delivery schedules are adhered to.

The league said Mazibuko's frustration with slower rate of delivery was felt by the poorest communities.